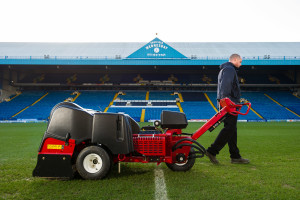 The challenge of tackling inevitable wet patches on a pitch has been eased at Sheffield Wednesday FC's Hillsborough Stadium, thanks to the club's investment in a new Toro aerator.

With recent difficulties alleviating wet patches with standing water, making it impossible to aerate with a tractor mounted machine, the Owls' Head Groundsman Andy Thompson decided to trial Toro's ProCore 648. Aerating both the wetter and shaded areas of the pitch, Andy was so impressed by the results, he subsequently put an order in with Toro distributor Lely UK.

"Back in November, when it was particularly wet, we used the ProCore to help alleviate a wet patch with standing water," he explains. "I can honestly say that without the machine, the pitch would have been too wet to play. Players, fans and TV spectators will not tolerate a playing surface that does not look or play as they have come to expect, so wet patches are an issue we have to solve."

Worked with both 13mm and 19mm solid tines to depths of around 90mm, the ProCore is pressed into service at least once a week to keep the rootzone profile open, with the far side of the stadium that is most shaded often seeing a twice-weekly pass with the machine.

This heavy use has significantly improved the pitch; its condition and playability having been enhanced since regular aeration has taken place.

Although a tractor mounted aeration system is suitable for some pitches, the high work rate of the pedestrian ProCore 648 has earned these machines a growing following for winter sports turf care.

Andy points out that while the machine comes with what may seem a high price point, regular aeration can make all the difference between water getting away and the pitch being fit to play - making the investment well worthwhile.