To find out for myself I made a visit to one of my local clubs, Shifnal in Shropshire, to meet up with Ian Fitzpatrick, their current Greens Chairman. Ian has a twenty-year association with the club and, in that time, has served on several committees as well as being Club Captain.

Ian began our conversation by talking about the challenges most golf clubs were facing and the need for them to evolve and embrace new opportunities. Retaining a full playing membership is getting more and more difficult for many clubs. With over 2,500 courses in the UK and an increasing number of pay and play facilities there is fierce competition for the player's pound.

Gone are the days of 2-3 year waiting lists when membership numbers were always full with fees paid up front. In recent years there has been a decline in membership, with some clubs not even having a full compliment of members, which in turn can have a knock on effect for their finances.

At the moment Shifnal are maintaining their membership levels, with over 400 full fee paying members and a further 300 Ladies, juniors and life members.

However, Ian emphasised that they cannot afford to sit in the comfort zone, they need to constantly monitor their performance and meet their members' expectations. Principally, the aim is to provide members with a challenging golfing experience at a well managed facility that caters for their requirements both on and off the course.

It is crucial that the club is well run on all fronts. However, Ian accepts that it is the quality and performance of the golf course itself that dictates the success and reputation of the club. This was the opportune time to ask him about his role and his relationship with his Head Greenkeeper and staff IAN is well aware that the relationship between him and his greenkeeping staff is vital for the success of the club.

He considers himself lucky that he and his Head Greenkeeper, Peter Leith, have known each other for well over twenty years and, more importantly, have a mutual respect and understanding of one another's roles and aspirations for the club.

Ian has been Greens Chairman for two and half years and is now serving his last term in office. He would like to be remembered for initiating some management decisions that have improved the efficiency and finances of the club.

One of his first changes resulted in the club saving over £20k per year. The course used to have 6 full time greenstaff plus seasonal workers during the summer months.

Two of the older full time staff left so, in consultation with Peter, there was the chance to re-evaluate the working schedules. By changing the working days to a seasonal rota, winter (6.5 hrs) and summer (9.5 hrs), full time staffing was reduced to five whilst, at the same time, pay and conditions were improved.

Overtime is a thing of the past. A bonus scheme was also introduced which encourages and rewards loyalty - the club pays an annual percentage increase to staff who have worked for them for five years or more, starting at 5% after five years service and working up to 10% after ten years.

The greenstaff also undertake a lot of work themselves which, previously, may have been put out to contractors. The difficulty, sometimes, for Peter and his team, however, is finding the time to do these jobs.

Ian and Peter meet on a monthly basis. Ian walks and, of course, plays the course regularly. He believes it is very important to support the greenstaff and listen to their views and concerns. Retaining staff and keeping them happy and motivated is the key to productivity.

The role of Greens Chairman, as Ian sees it, is to listen to the needs of both the members and Head Greenkeeper and, at the same time, act as a buffer between the two parties. It is part of his role to get the message across to members why certain jobs and tasks are being undertaken. 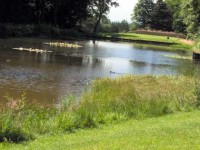 Often they only see the small picture and do not appreciate or understand the longer terms aims and objectives of Peter and his team.

A long term issue which the club needs to address is irrigation. The present system was installed in the 1970's and is now on its last legs. The club is looking at investing in their own borehole to ensure they can be self sufficient, therefore they need to design any new system around this option, as well as increasing the capacity to water tees, greens and provide a wash down facility.

The costs of this are expected to exceed £200k, a substantial of money to find for any club.Trying to find that level of money from present budget allocations is often difficult, it is all about prioritising needs.

Ian, is quick to recognise that his working background as a surveyor and supplier of land surveying equipment has helped him with his relationship with Peter, in that he has an affinity with the role of the Head Greenkeeper and understands the principles and practices that are necessary to maintain the golf course.

But, more importantly, Ian understands that the only way a club can prosper is when all parties move and work together, thus creating the appropriate golfing environment for all who play at the course. A golf club, in today's world, has to be run as a highly organised business, which requires commitment and clear, effective communication through all parties.

At Shifnal the results speak for themselves with members reporting that the quality of the greens this year are exceptional, with some saying that they are currently better than those at the Belfry.

From Ian and Peter's point of view it is pleasing to know that all their hard work and efforts have been worthwhile.