Bristol City Football Club Head Groundsman, Craig Richardson, has been overseeing the Ashton Gate stadium pitch and the club's training grounds for the past nine years, managing a team of three full-time staff. In 2005, he was awarded the League 1 Groundsman of the Year.

Since arriving at Bristol, Craig's role has grown - he now also oversees the management of the football pitches at the private school adjoining the club's training grounds, and has been involved with drawing up the specifications required for the pitch at the new stadium.

The Ashton Gate stadium was built in 1904 and, today, is surrounded by retail stores and supermarkets. It's a prime location for retail, but not ideal for match crowds which number 15,000 for most home games, and up to 25,000 can flock in for music concerts in the summer months.

Although the pitch receives none of the modern benefits of undersoil heating or artificial lighting through the winter, it does have a fibrelastic root zone which was installed in 2007. Craig explains, "This makes the surface softer and it's more forgiving on players' joints."

With the new stadium pending, further investment in the existing pitch is minimised. Craig must maintain the pitch for play as economically as possible. In the dry weather of this summer, problems with the irrigation ring main meant the water pressure had to be reduced, so he and his staff had to resort to watering areas of the pitch by hand. "In the end, it was such a long period of drought, we would have been better off spending the money on repairing the main but, then, hindsight is a great thing!" says Craig.

In June, boarding went down on the pitch for the usual annual summer concerts - this year these included Westlife and Bill Bailey. This meant pitch renovations had to wait until 22nd June before they could begin. With the first football match of the 2010/2011 season - a friendly against Blackpool on 31st July, a fast turnaround was required.

Renovations are programmed on a two year cycle, cultivated and resown one year and fraise-mown the next. This year, Craig and his team fraise-mowed to remove the top few millimetres of thatch. This reduces the amount of annual meadowgrass in the sward, whilst allowing the ryegrass plants to remain. The pitch was then oversown with MM60, a 100% perennial ryegrass seed mixture which contains Headstart for faster germination and establishment.

The training grounds are located a few miles outside of the city, at Failand and, unlike the sheltered neighbourhood of Ashton Gate, this exposed site gets cold and windy in the winter months.

"It's always three degrees cooler at the training site compared to the stadium," explains Craig. "Last winter, we had to use frost covers so that it was possible to make at least half a pitch available for each daily training session. Five sessions were completely cancelled because of the snow."

Originally, the club rented an area of training ground from the local private school. But, in 2008, planning permission was granted for a 22 acre field to be converted into sports playing fields. The club bought half of this, and the other half was purchased by the school. By taking over the management of the club's training pitches, Craig and his team can ensure players have a better surface to train on. The school's football pitches are now also managed by Craig and his team.

The training grounds are in use every day of the week - this includes not just professional players but also training sessions and games for Academy players and even a Junior Academy.

With the colder weather and high wear at the training ground, it is an ideal place to try out different seed mixtures and fertiliser regimes before making any changes back at the stadium.

End of season renovations involve all the pitches being topdressed and oversown with MM60. On a rotational basis, two of the four training pitches have the added benefit of being fraise-mown. Renovations this year took place at the end of April, and the site was back in use again at the beginning of July. Craig comments: "Despite the less than favourable conditions, the seed germinated quickly and established successfully and is performing well."

The Ashton Gate stadium holds up to 20,000. However, the proposed new stadium will seat 42,000 spectators. This is to be built on a brownfield site 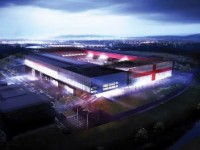 bordering the Ashton Vale area of Bristol, about half a mile away from the current stadium. The planned new stadium led to Bristol being named one of the twelve candidate cities in the bid for England to host the 2018 World Cup. It will also be a major conference and concert venue serving the south west region.

With his sports ground expertise, Craig has played a key part on the management team for the new stadium, "We enlisted the STRI to act as pitch consultants and worked with them to put together a specification for the pitch, which was then put out to tender, and an architect appointed."

Craig is well aware that the new pitch will require a new management strategy, "With its larger capacity, the stadium will have higher sides, and the pitch is to be constructed lower in the ground than the old one. So, this will mean there's more risk of frost, more shading issues and probably less air movement over the pitch. So, the specification that's been put forward states the need for undersoil heating and lighting rigs to combat these issues. These are, after all, now standard management tools at all the top clubs. The roofing over the stands is to be translucent panels, so this should, at least, help reduce some of the shading problems."

"It will be a completely fresh start at the new stadium, and we have one chance to get everything right. That's why we made the decision to get the STRI's technical support, to ensure grass growth and quality can be sustained despite the challenges of the bigger stadium.

"Building has yet to start on the new stadium, but it won't be too long before we are getting a new pitch ready for play. We are planning to seed the new pitch but, if time is tight, we might need to kick-start play by putting down turf."

Even once the new pitch is in play, and the old one left behind for the retail trade, Craig is still set to stay a busy man with yet another project to contend with.

A fourteen acre area of the training grounds is yet to be developed. The plan is to construct three full size and three junior football pitches. "It's never quiet!" adds Craig.