by Charmian Robinson
in Industry News
on 19 Feb 2011

This is going to be a good year for the young sportsmen at Belvedere College, one of Ireland's finest boys schools, based in the centre of Dublin. For the first time in many years they can look forward to a season of uninterrupted play on pitches in top condition.

Only three years ago it was common place for the pitches to be so waterlogged that it could take up to six weeks for the pitch to recover from a game. This would lead to best case scenario of having to re-schedule matches or at worst cancelling the fixture altogether.

David Geraghty is the Groundsman at Belvedere and responsible for maintaining seven pitches. "The ground has always suffered from compaction and a lack of effective drainage." Said David "One of the pitches in particular backs onto a lake which is prone to leeching into the surrounding area and on occasion has left the pitch under 1/2metre of water. We have managed by using a pump and pipe to excavate the water to a nearby drain. But last year we decided to take more practical and permanent action."

"We addressed the drainage problem initially by installing improved main lines down the 250metre length of the pitches with a manhole positioned in the middle and at the back end of three of the pitches. This helped the situation but it was the treatment with the Imants Shockwave which has really transformed the playing conditions." 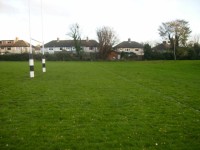 Belvedere College purchased an Imants Shockwave 155 in August 2009 following a demonstration by Campey Turf Care Systems in April. Brian O'Shaughnessy, Campey Product Specialist for Ireland is also very pleased with the performance of their machine. "The Imants Shockwave is designed to remove surface water and revitalise heavy wear areas by relieving soil compaction, improving aeration and removing surface water." said Brian "So when David explained the problems they were having I was confident that despite the severity of the compaction it would be a real benefit to them. When the area is treated with the Imants Shockwave it creates a surface and soil structure that drains well and remains dry, with minimal impact on the playing surface so play can be resumed soon after treatment."

Working in isolation or in conjunction with existing pipe drainage schemes, the Imants Shockwave is the perfect method of enabling water to drain quickly and unimpeded to the existing sub-surface systems. The Shockwave also leaves a continuous slit allowing the operator to slit back to drains, ditches or other water collection systems.

The PTO driven rotary decompactor features a no-chains direct drive design, maintenance free 'sealed for life' bearings and mechanical drive overload protection provided by TORQUE LIMITER PTO. Working widths are 1.00m - 1.55m - 2.10 - 2.2m & 2.5m with working depths of 120mm to 530mm depending on model. The blades range from 12 at 12mm thickness on the 1.00metre machine to the 27 at 25mm on the heavy duty Shockwave 250. The Shockwave can also be used on Golf Greens, Fairways, Tee boxes, Pitches etc to relieve compaction.

"We used the Shockwave twice on all seven pitches; once in September and then again at the back end of October 2010." Said David "The difference was quite astonishing." It's not just about improving drainage, drying out the soil, reducing the compaction. What was most noticeable was the overall quality of the playing surface. It has obviously had a dramatic effect on the root zone, because the grass is strong and able to withstand the impact of continuous play. We still had as much as 70% grass coverage in March 2010 after a full season."

Having rectified the growing conditions of the soil, David also took steps to improve the quality of the sward by investing in a Vredo Overseeder to eliminate waste when overseeding. "We over seeded last Spring with approximately 1100kilos of a good quality sports field renovation mixture of perennial rye. "The Vredo Overseeder was another very worthy investment." Said David "There really is no waste. T

he discs penetrate the surface and distribute the seed at a depth of 10mm. This seems to be deep enough for them to be protected from the elements. We had minimum growth because of low soil temperatures until around May, and then the seed really took hold. By September last year we had 100 percent coverage of an excellent looking, strong sward ready for the coming season. All seven pitches have been in full use throughout the rugby fixtures, with only one cancellation due to the extreme weather. Amazing."