"Frost covers certainly have a big future in the racing industry, but we must remain cautious and not blindly believe that deploying covers equals racing on; Mother Nature can often have the last word"

Trumpton was the name of a popular children's TV show back in the sixties, and the toy town had an array of splendid buildings including the town hall, a clock tower, a variety of shops and a fire station. Impressive though it may have all been, one facility Trumpton didn't have, however, was a picturesque and award winning racecourse. Which is what the real-life tiny village of Plumpton, in the midst of the beautiful East Sussex countryside, now has.

Plumpton Racecourse has recently picked up one of the horse racing industry's most prestigious accolades - the 2009 Neil Wyatt Racecourse Groundstaff of the Year Award 2009, Best Jumps Racecourse, beating off competition from some of Britain's more illustrious and better known national hunt venues.

Considering the size of the course, this achievement is all the more impressive. Plumpton has the second smallest racing track in the country at just nine furlongs in circumference. For some races the horses have to pass the winning post four times!

The course is also located some distance from any significant sized town, with only one way in and one way out - a mile long country lane. A single sign at the end of the lane, plus a regular flow of horse boxes, are the only indications that a race meeting might be taking place.

So, how has this small, but beautifully formed racecourse managed to reach such dizzying heights? 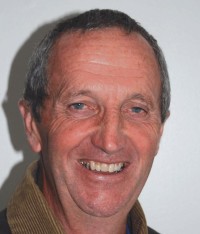 On meeting the course's Head Groundsman and Clerk of the Course, Mark Cornford, the question becomes almost academic. It is difficult to imagine meeting anyone with as much enthusiasm and commitment to his work. Just coming up to thirty years service at Plumpton, Mark's first reaction when asked about the award is to praise his staff.

"I'm so proud at what they've achieved. We've only got a four man team, and that includes myself, my nephew, Mac Cornford as assistant head groundsman, who tackles most of the tractor and quad bike driving operations, John Tampsett is our fence man and Alan Greening looks after our lawns. I should also add that Alan's DIY talents are legendary. And then we have Ray Nye, our regular part-time painter, who keeps the interior and exterior décor up to scratch whilst always finding the time to lend us that extra pair of hands when needed."

Mark's pride in his team is matched by his undoubted enthusiasm for his award winning racecourse. Although, as he explained, it hasn't always been so well maintained. With a subsoil of Sussex clay, the removal of surface water has always been a major problem, causing unpredictable and, sometimes, variable underfoot going conditions.

"In the second half of the seventies, just before I joined Plumpton, the course had some drainage work carried out around the bottom bend and the back straight hill," explained Mark. "This made a great improvement in these areas and, indeed, there was every intention to carry out more. Unfortunately, a period of what could only be called "standing still" followed with little, if no, investment in course drainage work undertaken."

The lack of investment meant meetings were lost, season after season, to wet weather. "In particular, the pinch point area in front of the grandstands was often deemed unraceable, when most other parts were fine," recalled Mark. "There was also a bad winter in the 80s when we lost all our January and February meetings to frost." 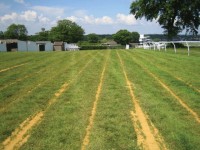 The change for the better took place in 1998 when new owners with new management came onto the scene. The course was purchased by Peter Savill and Captain Adrian Pratt, and plans were set in place to upgrade all areas of the course, including buildings and track. Impressive entrance gates and signage were installed to kick start the new era.

"Work started immediately," explained Mark. "Drainage work to the majority of the home straight, including in front of the grandstands, began after our last meeting of that season in early May."

"I remember meeting the new Clerk of the Course, David McHarg, in late June. I was able to show off the newly drained area front of the stands, which was already well into recovery, and proudly declared that we should not lose a meeting due to waterlogging on this part of the track. And, to this day, we haven't."

With this positive, refreshing attitude, Plumpton's development continued apace with drainage improvements undertaken annually. Over the following years work to the hill top of home straight, the exit to the top bend, the start of the back straight and the entire hurdle side of back straight hill, have all been carried out.
"We undertook all the drainage work to the same standard and specification," stated Mark. "Pipework was put in first with main carrier drains fed by laterals at 5 metre centres, on top of which, and running across them, we installed gravel and sand banding at one metre centres to enable surface water to filtrate through the clay and into the pipework as quickly as possible."

More drainage work was undertaken this year, at the end of May, using the same local contractor, J Thomas (Southern) of Henfield. "We have used this company for a number of years now with great success, they work to an agreed specification and always within our budgets to achieve the best result," said Mark. "The project this year is to improve the removal of surface water from the area at the turn out of the home straight." 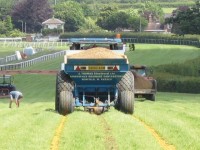 espite all the improvements to the track, Mark appreciates that you are still at the mercy of Mother Nature. "You could have all the drains in the world, but late overnight heavy rain within 24 hours of your first race will always cause you problems. Drains, as good as they are, still need time to work!"

As a pure national hunt course, Plumpton has to operate during the worst of the British weather. Sixteen racing fixtures are staged during a season that starts in late September and ends in the middle of May. The steeplechase course has a relatively narrow track that offers very little in flexibility of width and, apart from the bends, the course line alters very little with the fences never moved. The hurdle course has a bit more variation, with flights positioned on an inner line for early and late season meetings and on an outer line for mid-winter meetings.

"Over a season there will be twice as many hurdle runners as chasers, and it's our hurdle course that always shows most wear towards the second half of the season," explained Mark. "With our small circuit the horses run over our ground two or three times per race, creating damage that would make many a groundsman from other spheres cry."

In recent years, the use of frost covers on racecourses has become more widespread, and the team at Plumpton has been eager to embrace this new technology. The course first deployed them in December 2007, and saved a meeting from the threat of overnight frost. Covers have been used on a further five occasions, only once failing to beat the weather, in early January 2009, when temperatures as low as minus 9 degrees centigrade were recorded. 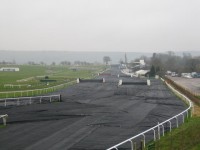 "We have Tildenet covers which are able to withstand frost entering the ground at temperatures around the minus 4 region at best," explained Mark. "Frost covers certainly have a big future in the racing industry, but we must remain cautious and not blindly believe that deploying covers equals racing on; Mother Nature can often have the last word."

Returning to his favourite topic of conversation, his staff, Mark outlines some of the usual maintenance procedures in place. "When it comes to course repairs we all work together, pulling in one direction to achieve the best possible results. We all build the fences, but we follow John's lead. Right from the start, he showed a natural talent and keen eye for levels when cutting off new fences; his background is greenkeeping and his abilities are endless."

Mark considers himself fortunate to be able to call upon a well respected and much needed part-time casual workforce who bolster the staff numbers for race days and track repair days that follow. "We aim to walk and fork the course back the day after racing, and then lightly roll with our Cambridge ring roller to level the surface. We topdress after every meeting, as necessary, with a 50/50 rootzone and seed mix. A typical year at Plumpton has historically accounted for 240 tonnes of rootzone or sand, depending on underfoot conditions, with an average cost of £6,500 per season." 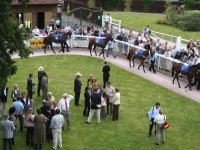 "Other work includes aeration, which is carried out as often as possible," Mark continued. "But, you have to remember we are a winter sport and, during the dark days of December, January and February, the opportunities are not as often as one would like. Again, harrowing the course to remove thatch with the Opico spring harrow helps to keep a healthy sward but, due to the excessive wear we endure during a season, this is also mainly a summer/autumn operation for us."

During the first week of June local contractor, Peter Mannington, is brought in to decompact the course, using a 2.6 metre heavy duty verti-drain. "We also hire a Vredo seed drill from Peter every spring to direct drill our grass seed," continued Mark. "Barenbrug Bar 7 seed mix has been used here for the past three years with great success." 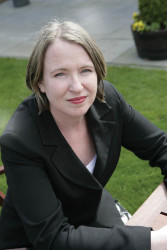 Supporting Mark in his endeavours is the Chief Executive of the Course, Claire Sheppard. With fourteen years experience in the racing industry, first with Tote Direct, followed by five years as Commercial Manager at Musselburgh Racecourse, she took up the post at Plumpton two years ago.

"This is my dream job,' she enthused. "Horseracing has been my passion from an early age and, after leaving university, my ambition was to work within the sport that I love."

"This award is the culmination of many years of hard work and investment by the owners and staff and, certainly, we will not be resting on our laurels," continued Claire. "We have further plans to invest in the track and facilities to improve the raceday experience for all our customers. In addition to the current drainage works, we will be redecorating the public areas and upgrading the backroom areas for stable staff and jockeys."

Ever mindful of the need to be aware of other commercial opportunities to diversify revenue streams, Claire explained that they were planning to stage their first ever drive-in movie at the course.

Come to think of it, that is something else the toy town of Trumpton didn't have.