A decade ago, a greenkeeper cutting greens down to 2mm for long periods would have been considered, by most, to be insane. Conventional wisdom at that time was that such an aggressive cut would severely stress the grass plant. Normal cutting heights were around the 4mm mark and, if an adventuresome greenkeeper dared to go lower, 3mm would be the limit. But, times have changed. An advocate of the short cut, Greg Evans, Course Manager at Ealing Golf Club, has been maintaining greens at 2mm for the last six years with outstanding success. In his opinion, cutting at this height does not overly stress the plant, but can actually be beneficial to the grass.

Before I became a Course Manager, I was the sort of golfer that greenkeepers hated. I demanded fast true greens with no excuses. You could often find these greens on sandier soils such as links or heathland but, as soon as you came inland to parkland clay based courses, the speed slowed down considerably.

The main reason for this was that sandier links type soils produced the finer grasses such as fescue and bent whilst the clay based parkland course had poa dominated surfaces. The same height of cut for these grasses will produce different speeds. If you were to cut a green at 5mm fescue would produce the fastest surface, followed by bent with poa producing slow 'snakey' ball rolls.

But why do golfers prefer fast greens? Fast greens, if maintained correctly, do produce the best ball roll. The slower the ball roll the more drag or resistance encountered. I remember playing the London Golf Club when it first opened. The greens that day were the best I had ever played on. The ball never left the surface and rolled true and straight. They were also the quickest greens I had ever played. Coincidence? Absolutely not!

A fast green increases the skill level required for putting. With advances in club technology, golf courses have now become overpowered. My own club for instance, only measures 6,200 yards. Twenty years ago, the first hole played a drive and 3 or 4 iron. Now days, golfers require only a 6 or 7 iron for the second shot. This increase in power has left many courses defenceless, leaving putting as the last challenge remaining to the serious golfer on courses which are becoming shorter through technology.

Putting is an art which can and should remain a challenge on all courses. Greens that are very flat will have very little break in the putt with greens stimpmeter reading at seven or eight feet. Increase this speed to ten or eleven and you start to have some slope there, and they become trickier to read. Increase this further up to twelve and you won't have flat greens any more!

But, probably, the most important reason for keeping your greens fast is that the golfers prefer this type of surface. They are our customers after all. There was a recent study completed in America about green speed. The ideal stimpmeter reading preferred by golfers in that survey was 10.5.

How many times have you heard a golfer say to the greenkeeper "at the course down the road, the greens are much faster; why can't we have faster greens here?"

Well now that is possible, provided the course has a solid maintenance plan to support this strategy.

It doesn't matter what height you cut, cutting puts stress on the plant. But this is where an intelligent cultural plan comes to the rescue. With a scientifically designed cultural plan, the greenkeeper will be able to adjust the height and frequency of cut to meet a wider array of strategies.

A cultural plan, when teamed with an appropriate maintenance plan for cutting greens, is not the entire solution. A combination of other factors also needs to be considered to keep greens healthy, no matter what the depth of cut.

However, three additional procedures need to be at the top of the list if a greenkeeper wants to maintain a tight cut:

The first is aeration. Aeration has, traditionally, been done throughout the winter months. This is when the course is quieter and, generally, golfers put up with this sort of operation. But this is not the best time to aerate.

The summer months are when your plant will be under enormous pressure through maintenance regimes and play. Help is needed to move air and water through the profile. My regime is to deep spike monthly throughout the summer. I also put a little bit of heave on the machine to create 'cracking' in the soil. I do this with a small 8mm tine, wide enough for a dressing to go into, but narrow enough to keep disruption to a minimum. It will allow oxygen to get to the roots when they need it most and relieve surface compaction.

The second procedure is topdressing or 'sanding'. To create and cut smooth greens, topdressing is a must. This will help to maintain tighter cuts. The conventional way of topdressing was to apply a 70/30 or 80/20 sand/soil mix. But a lot of people, myself included, are going away from using this type of mix and using straight sand. There are a number of reasons for this.

The first is cost. A sand/soil mix will cost around £20 per tonne more than straight sand from my supplier. When you are applying 200 tonnes per year, the saving is significant. Drainage is also a factor. The most important factor for cutting tight greens is to have a dry surface.

By going with a pure sand dressing you will be creating a sandier rootzone with greater pore spaces for water and air to access roots. But, remember, the most important thing with topdressing is frequency. Ideally, light, fortnightly applications should be applied which will help to keep the surface firm.
Verticutting

The third procedure is verticutting. There has been a lot of debate about this operation over the last few years. The disturbance theory for one, has called for it to be reduced or even eliminated. I think this is a grave mistake. Verticutting a green aggressively and frequently will produce an upright plant.

This will allow the ball to roll across it with minimal friction. When verticutting is decreased, the plant is allowed to grow laterally and drag or 'nap' will affect the ball roll.

Major equipment manufacturing companies are now encouraging grooming in place of verti-cutting, but their motives may have more to do with sales than exciting golf.

By grooming frequently, the height can remain higher thus easing the sustainability risk. But the problem with grooming is that it puts a lot of stress on the outside or perimeter cut of the green and, in my opinion, grooming should never be substituted for verti-cutting.

A further problem with reducing the verticutting regime is that it will increase the thatch build up in the top surface. This again will cause the green to become 'nappy' and cause drag on the ball roll. 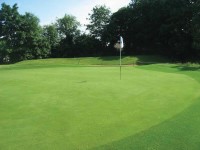 By putting the emphasis on the three procedures above greenkeepers can move toward a course regime that can sustain a low cut. A well maintained fast green produces the best ball roll and, to achieve this, the height of cut must be low. A poa or bent based green cut at 4mm will not produce a fast ball roll unless additional practices such as rolling and double cutting are applied.

For everyday play this is not feasible or healthy and, if greenkeepers were to do this regularly, it would place the grass plant under even more stress. By cutting at 2mm, you will be able to keep the greens speed fast each day with much less plant stress.

So what will all this do for the greenkeeper's health? Maintaining surfaces that customers want will decrease your stress levels. Contrary to what many people believe, you won't be making a rod for your own back. You can increase membership and societies which will, in turn, increase the clubs revenue. Forgive the pun, but there really could be a short cut to better golf.