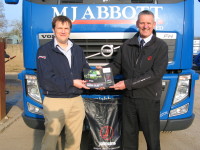 Two leading sports and amenity contractors have newly signed up as distributors for the world's largest grass breeder and producer.

"We agreed the contract with DLF Johnsons late last autumn following the close of the sowing season - and announced it at BTME Harrogate in January," said Adrian Abbott, Technical/Sales Director of MJ Abbott Ltd.

"We'd always dealt with DLF Johnson as we're a large contactor in the golf and sports sector but felt we needed to find a way of maintaining links with our customers on a longer-term basis once we'd finished the initial job, which led to the launch of MJ Abbott Direct 18 months ago - a new arm of the business that acted as a portal to sell products to the amenity markets."Aligning with DLF Johnsons makes sound business sense for Abbott, who was "won over by the sheer scale of DLF's operation".

"I drew confidence from the scale of research and resource of the company. It can deliver on a big scale and, more importantly, on time," he added.

A similar sentiment was sounded by Phil Day, Managing Director of Phil Day Sports Ltd, who firmed up their deal with DLF at the tail-end of2011.

"We'd been buying Johnsons seed for some time so signing up to become an official distributor formalised our relationship," he said. 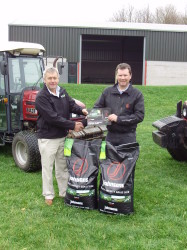 "The scale of R & D at DLF Johnsons has enabled it to consistently deliver the top cultivars in the Sports Turf Research Institute's independent trials, facilitated by their tremendous breeding programme. We've long thought of Johnsons as the premium seed producer, and one whose products our customers demand."
Innovation has brought some of DLF Johnsons products to the forefront of the market in the last few years - notably iSeed and J Rescue, and it is developments like these that have impressed leading contractors such MJ Abbott Ltd and Phil Day Sports Ltd.

"DLF have shown themselves to be innovators," Adrian Abbott added, "and we've found that customers are asking for products like J Rescue more and more." We've also noticed the demand for iSeed is really building - this season especially - following the widely publicised success of some of its early adopters."
Phil Day too has also noticed the trend for Johnsons latest ranges.

"A few products have always been very popular with our customers. The J Premier is number one among our customers and the J Rescue has shown to be very successful through the winter months achieving good growth in cold weather."