Active8 Leisure Ltd has invested in new golf course maintenance equipment with a retail value in excess of £130,000 for its Ellesmere Port Golf Centre. The equipment has been purchased from Suffolk-based Ransomes Jacobsen, through their local dealer, Burrows (GM) of Stafford.

Active8 Leisure was formed in September 2000 to manage leisure and community services on behalf of Ellesmere Port and Neston Borough Council. Malcolm Cooke is the Manager at the centre with a remit to update, improve and maintain the facilities to a high standard.

"The purchase of this equipment clearly demonstrates Active8's commitment to the residents of Cheshire West and Chester and to sport in Ellesmere Port in particular," he said. "At the Centre we also have a fitness suite, squash courts, golf shop and an indoor teaching bay, providing an excellent range of facilities.

"We have been steadily improving the course over the past three years and a lot of credit goes to Ray Vernon, our Head Greenkeeper, and his team for what has been achieved. Now, with this latest equipment, we have a quality course maintenance fleet, which will enable us to move on to the next level." 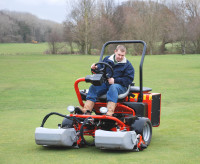 The management by Active8 is definitely achieving significant results as can be seen by comparative golf utilisation figures posted on the Centre's notice board. Looking back at the month of January for the last three years, 227 rounds of golf were played in 2007, 612 in 2008 and 1199 last January. Similarly, usage of the fitness suite in comparative January's improved from 11 in 2007 to 197 in 2008 with 457 visits this year.

Another impressive statistic is the Junior Golf Academy which was formed in June 2008 to open up access to young people who may not have been able to take up the game due to financial or social reasons. Over 1000 youngsters registered for the first open session and 70 have been retained to date.

Malcolm Cooke concluded saying, "We have worked really hard over the past three years to deliver on our promises and we are certainly seeing the improvements coming through; significant investment resulting in improvements to the golf course; greater usage of all the facilities and the success of Junior Academy."