If you see a ridiculously good looking chap driving an Audi R8 through Japan, that could well be Simon Freeman, Head Greenkeeper at Machrie Golf Links on the Isle of Islay, assuming, of course, that he had won the lottery! 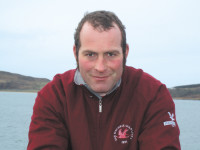 Who's your hero and why? Anybody who plays in a St. Johnstone shirt. I've been going to watch them since I was seven.

What is your dream holiday? Places that fascinate me are those with different cultures like Japan, Russia, China. Japan would be my first choice.

What annoys you the most? At work, I would say that it would be jobs not getting done as well as they would have been if I'd done them myself. The opposite is true as well, though - nothing pleases me more than a job which has been done surprisingly well.

What would you change about yourself? I'd love to have a bit more confidence in my own ability.

Who wouldn't you like to be? A greenkeeper on a wet municipal course in a big city, which gets pounded monotonously by thousands and thousands of golfers who don't care about their surroundings. I can only imagine how soul-destroying some of these jobs must be.

Favourite record, and why? The Stone Roses, by The Stone Roses. I bought it the first week it came out, and I still listen to it at least once a week, nineteen years later.

Who would you choose to spend a romantic evening with? Someone I could flirt with tirelessly, and who I could really enjoy the company of. I'm going to pick my wife. I know I'll always have a really good time if I take her out.

If you were to describe yourself as a musical instrument, what would you be? Lead Guitar. I like being centre stage and in control of proceedings.

What's the best advice you have ever been given? I can't think. Obviously I just don't listen!!

What makes you angry? Idiot politicians who fritter our money on bureaucracy while lining their own pockets. And there's nothing we can do about it, because they're all at it.

What law/legislation would you like to see introduced? Anyone who can work, but doesn't because they can't be bothered, should be forced into government organised chain gangs to keep the country's infrastructure going for the benefit of those of us who can be bothered.