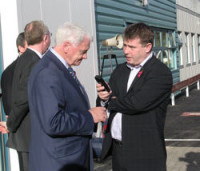 One of England's most respected football managers, Sir Bobby Robson, was the guest of honour at the opening of Ransomes Jacobsen's new office building at their headquarters in Ipswich.

Sir Bobby spent 13 very successful years as manager of Ipswich Town, from 1969 to 1982, and his popularity was clear to see as he toured the factory, taking time out to have his photograph taken with many members of the workforce. Even Norwich City supporters were queueing to have their photos taken with him! 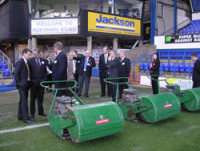 Welcoming Sir Bobby was the President of Jacobsen, Jon Carlson, who thanked the staff for their work and emphasised the importance of having a manufacturing base at Ipswich for both the UK and European markets. The major, ongoing improvement works at the site were an indication of their commitment to a long term presence at Ipswich.

Earlier in the day, guests of Ransomes Jacobsen were treated to a visit to Portman Road, the home of Ipswich Town, where they were given a very informative tour of the stadium by Geoff Hodson, an Ipswich supporter since 1947. By an amazing coincidence, the groundstaff were out preparing the pitch using their Ransomes machines!

In the afternoon, a tour of the factory was arranged, showing the extensive improvement works currently underway.