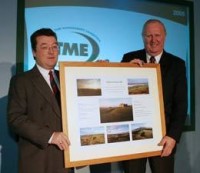 Sir Michael has been described as Britain's Finest Amateur of the 20th Century and was Secretary of the Royal and Ancient Golf Club of St Andrews from 1983 until his retirement in 2000.

He won the Amateur Championship five times - in 1961 at Turnberry; '65 at Royal Porthcawl; '68 Royal Troon; '69 Hoylake and 1970 at Royal County Down while as Playing Captain he lead Great Britain and Ireland to their first Walker Cup in 33 years at St Andrews in 1970.

He won the Silver Medal as top Amateur in The Open Championship twice and was in contention on the final day to win the actual Claret Jug on several occasions.

During Harrogate he was presented with a specially commissioned print showing the five courses at which he claimed the Amateur Championship and St Andrews where he led the victorious Walker Cup team and was based as Secretary of the R&A together with a record of his major achievements.