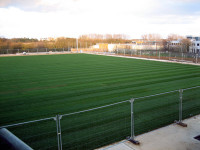 Sports ground construction specialists SIS (Support In Sport) Ltd have won the contract to supply and install the pitch at the new Barrows Farm stadium, which will become the impressive home of Harlow Town FC.

The turf for the £3m facility has been specially grown by Sovereign Turf of Suffolk, one of SIS's business partners.

George Mullan, Chief Executive Officer of SIS UK Ltd, is delighted to have won this prestigious contract. "Top clubs appreciate our ability not just to design and build turf surfaces of the highest possible quality, but also our skill in achieving this in the shortest possible time scale. This minimises disruption and means important revenue-earning events can be staged almost immediately.

"We have successfully undertaken fast-track construction projects at Old Trafford, Hampden Park, the Millennium Stadium and the Delle Alpi Stadium in Turin.

"Our partnership with Sovereign Turf means we can be sure of the quality of the new playing surfaces, so it exactly meets the client's requirements."

A new drainage system was installed and a particularly hardwearing turf selected for the surface, as the pitch will also be used by the wider community.

The Barrows Farm project is part of the £42m Harlow Gateway initiative, a major regeneration scheme for the Essex town that will include improved sport facilities and new housing.

The new 3,000-capacity stadium will include a 352-seat covered main stand, covered terraces to the east side and an open south terrace. A bar and conference facilities will also be incorporated. The development will help Harlow Town FC in their bid to reach the Nationwide Conference. The team currently plays in Division One East of the Southern Football League.

Work on the Barrows Farm stadium is expected to be completed by the end of April. The inaugural match will take place on 1 July, when Harlow Town welcome Linfield of Northern Ireland.

SIS have also won the contract to install an XtraGrass pitch at a similar regeneration site in Dartford, Kent. Previously sharing a ground, the new Dartford FC site at Princes Park will be completed in the summer of 2006.