SIS Pitches has joined forces with The FA's National Football Centre, St. George's Park, on a brand new facility that will help the England Blind Squad's quest to win next summer's European Championship. The Cumbrian based firm has built a dedicated Blind Football pitch at the nation's home of coach education, which the England blind team will use as a training base ahead of the 2015 Euros in Hereford. 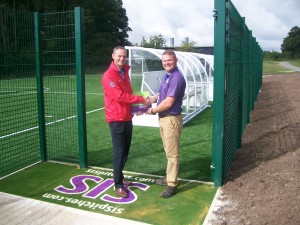 CEO of SIS pitches George Mullan commented: "We were extremely excited to be working at such a prestigious venue in St. George's Park and supplying what will be an invaluable resource for Blind Football."

The work, which was completed over five weeks in the summer, includes the SIS Superior 3G surface, 2.4 metre high rebound fencing, team and referees shelters and hard standing areas for team supporters.

The National team, who have also received two years of funding worth £1m from The FA, need to reach the final of the Euros in order to qualify for the 2016 Paralympics in Rio.

Head of Disability Football at The FA, Jeff Davis, added: "We're delighted with the new pitch and it's a facility that can only strengthen our player coaching programme as we look ahead to next year's European Championship and the Paralympics in 2016."

The FA has confirmed that the new pitch will be named after Tony Larkin who is a former Head Coach of the England Blind Squad and led Great Britain at both the Beijing and London Paralympics.