0 SIS Pitches to build another new pitch in Russia

Cumbrian firm, SIS Pitches are continuing to grow their portfolio in Eastern Europe with the confirmation that they are to build another new pitch in Russia. 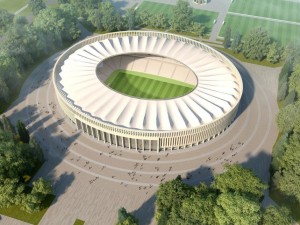 SIS's Eastern Europe team have been contracted to build a new stadium pitch for FC Krasnodar, who play in the Russian Premier League and are currently building their new stadium. This follows on from their recent work for Spartak Moscow's brand new stadium the Otkritie Arena in the summer.

The pitch will be Russia's first cooled and heated pitch with an under soil aeration and heating and cooling system.

Design works have already started and will be completed in early December 2014. Construction works are planned to start in March 2015 and completed in May 2015 with a total of more than 30 employees from SIS Pitches involved in the project.

The opening ceremony of the brand new stadium is planned for October 2015 and SIS Pitches will continue to maintain this unique pitch once it is opened.

Krasnodar is a city with hot summers and cold winters and it will be another challenge for SIS who have got the experience in working from hottest climates in Dubai, to coldest climates in Moscow, which was a great advantage of SIS in winning this project.

Ilyas Kobul, Managing Director of SIS Eastern Europe says:
'We are very happy to be the main contractor for the new FC Krasnodar pitch which will be the first one in the territory to have a cooling and heating system together with air and water. SIS Pitches is becoming well known in the Russian market and we are looking forward to starting building this pitch.'