Dennis and SISIS have returned to home soil following an extremely successful Golf Industry Show (GIS) in San Antonio, Texas, where the new SISIS Flexi400 was the star of the show. 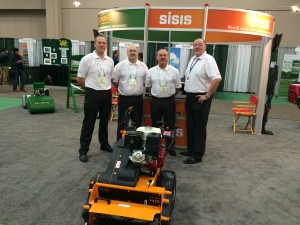 'Where Big Things Happen' is the motto of the world famous GIS event and it proved to ring true for the turf maintenance equipment giants after they were inundated with high quality enquiries.

The SISIS Flexi400, which was introduced to the US market for the very first time at the event, was of particular interest to many superintendents who made their way to the Henry B. Gonzalez Convention Center. It proved to be so popular that one eager visitor, who couldn't wait to get his hands on the machine, purchased the very one that was being showcased on the stand.

After its successful UK launch at BTME in January, it is easy to see why the Flexi400 was such an instant hit at the GIS. Specifically designed for fast and effective coverage on large areas such as golf fairways and sports grounds, the new 4m wide Flexi400 is an interchangeable unit with seven fully floating heads which allows it to follow ground contours. The unit can be fitted with either a roller or brush heads and is ideal for the removal of dew, striping for improved presentation, lifting grasses prior to cutting or brushing in top dressings. It is attachable to the tow unit by a simple 50mm ball hitch or clevis pin and both arms can be raised for ease of storage or transportation.

Although the spotlight may have fallen on the new Flexi400, interest was still rife amongst the other Dennis and SISIS machines on the stand, which have proved to be consistent, top performers and relied upon by superintendents, groundsmen and greenkeepers around the world.

The impressive line-up included favourites such as the SISIS Rotorake 600HD - a heavy duty pedestrian scarifier and linear aerator; the tractor mounted SISIS Veemo MK 2 - perfect for removing thatch from large areas of turf such as golf course fairways; the Dennis FT510 - engineered to maintain areas of fine turf with a range of 11 different heads and the SISIS Auto Rotorake MK5 - a self-propelled heavy duty scarifier for the removal and control of thatch.

The GIS attracts visitors from not just across the US but also Europe, Asia and South America and offers leading manufacturers the opportunity to put the best machinery in front of a worldwide audience.

As Dennis and SISIS continue to fly the flag for British turf maintenance equipment, their appearance at global exhibitions such as GIS, is testament to its commitment and rapid growth in the export market.