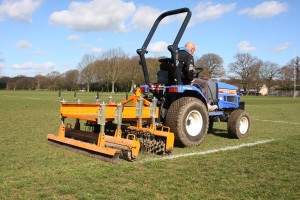 "We approached Brentwood Council back in February last year to ask for their support in improving the rugby pitches which are in a public park, administered by the council under King Georges Trust," said Peter Watson, the club's treasurer. "The council were very supportive but pointed out, that like most local authorities, there were constraints in terms of the upkeep of their facilities."

"They offered us the innovative solution of the rugby club taking a lease of the pitches over a period of 25 years, thus making Brentwood Rugby Club responsible for the upkeep of the pitches. That coincided with the RFU launching two grants for funding leading up to RWC 2015 - one to improve social spaces and one to provide grounds maintenance equipment in partnership with Iseki for the tractor and SISIS for the maintenance equipment. We were fortunate enough to obtain a grant from the RFU to purchase the heavily subsided pitch maintenance equipment - as recommend by the RFU head groundsman Keith Kent."

The RFU grant came at the perfect time for the club and the new partnership that they were entering with the council. The grant monies was also further subsidised by a grant from the Ford Britain Trust which further offset the cost of machinery to the club.

The 1.8 metre wide SISIS Quadraplay is a versatile pitch maintenance system which connects to any tractor with a 3-point-linkage. The system includes a mounted frame with four implements which can be arranged in any order and can be lifted out of use when not required. A single pass allows up to four operations to be carried out simultaneously including surface aeration, sward cleansing, rolling and brushing, which when combined together, enable groundsman to prepare and maintain a pitch to the desired standard as well as looking aesthetically pleasing.

Simple design with low maintenance, the SISIS Multitiner is a drum type tractor mounted aerator, which is ideal for use on sports fields and fine turf surfaces. Fast and effective to improve drainage and encourage better root growth; the aerator incorporates quick release solid tines and a working depth of up to 100mm.

Steve Gildersleeve, the part-time groundsman at the rugby club who also shares his duties and time working for the council commented: "The SISIS Quadraplay is the main tool we use for the maintenance of the pitches. I'm delighted to have it because it saves me considerable time as it's able to do four different jobs all at the same time. It's simple to use with very little on-going maintenance. It's a very versatile system which we can also add new implements as and when we need to. We have operated the maintenance equipment since August 2013 and despite the worst winter in terms of rainfall; the pitches are now the best we've ever had."

Future plans for the club include full drainage works of their training pitch with the help of a grant from Sport England later this summer. "Once completed, we will use the maintenance equipment on the new surface - maintaining it to a far greater standard than we were previously able to," said club chairman Richard King.

"Players, supporters and even opposing players now comment on how good our pitches are. They have never looked better at this time of the year. Steve, our groundsman has become iconic here as he's known by everyone to be out here 15 minutes after the matches have finished with the equipment."

Comments echoed by Steve Killington, director of rugby: "The pitch maintenance equipment is so important to us. Since we've had it, we've only had to postpone one first team game this season - despite the weather, where many other clubs in the area were postponing games for the whole of January and February and that's largely down to the SISIS maintenance equipment. It kept revenue coming into the club, which has made a big difference for us.

Even with the poor winter, the pitches are the best they have been in the 27 years I've been here and going forward they are only going to get better. The SISIS equipment has been a real asset to us."