Following extensive trials conducted by the STRI (Sports Turf Research Institute), it has been concluded that the SISIS Javelin Aer-Aid tractor mounted aerator would be an essential tool within any integrated turf management programme. 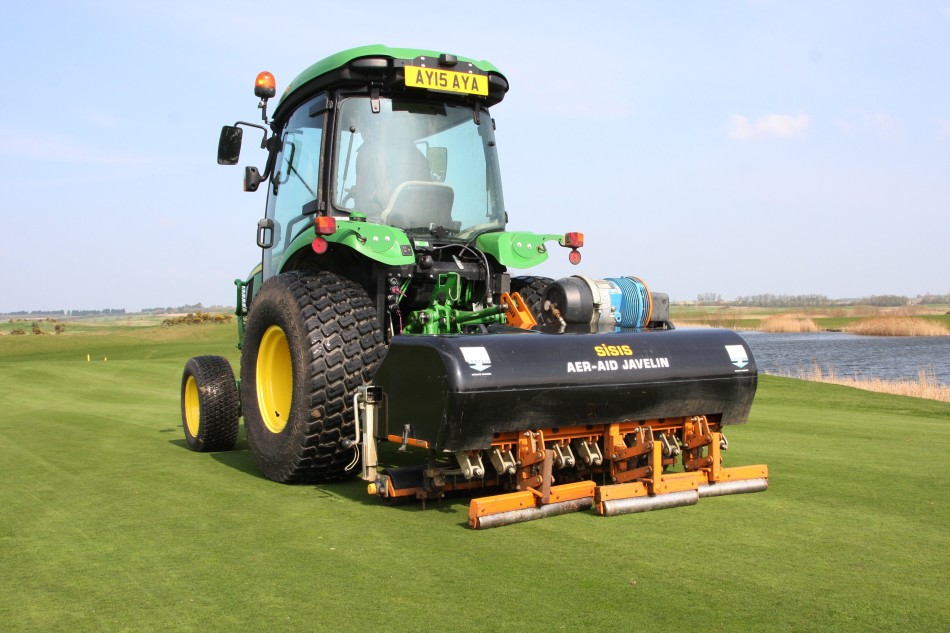 Over a four month period, extensive STRI trials led by Dr Christian Spring were carried out at the world's leading sports turf consultancy's headquarters in Bingley, West Yorkshire. The research saw three trial plots set-up in which one area examined the effects of the SISIS Javelin Aer-Aid with air injection, one with the Aer-Aid without air injection, while the other plot was left un-treated. In particular, Christian and his team of researchers were looking at how and if the Javelin Aer-Aid had an effect on the hardness of the turf, root depth, water infiltration and disease.

"The SISIS Javelin Aer-Aid was really effective in reducing compaction," reported Christian. "In measuring the penetration depth, we ran the Aer-Aid over the surface and found that the probe was able to penetrate further into the soil profile, indicating that compaction throughout the entire trial site was significantly less than areas that were left un-treated."

"It became obvious that the Aer-Aid improved maximum root and depth within the soil profile and also had the benefit of increasing the depth of the average rooting mass. The reason or the rationale for this improvement was likely to be a result of the increased air space in the soil profile created by the air injection and the fracturing that resulted from that."

With 10mm diameter 'tipped' tines working at 75mm (3ins) spacing, air is introduced from the Aer-Aid at a rate of 88 litres (3cu.ft.) per minute at 120 PSI. These air injection tines are specially designed to use the maximum air available from the compressor and produces clean, fresh air, while also ensuring that surface disturbance is kept to a minimum. The cam trigger mechanism ensures that the air is always expelled at the bottom of the tine penetration, enabling treatment to be targeted precisely and consistently at desired depth

It is common knowledge that well-aerated turf with good drainage and air circulation will experience fewer moisture problems, and during the trials, Christian reported that the plot which had been treated with the Javelin Aer-Aid had been extremely successful in keeping an all too common disease at bay.

"The use of the SISIS Javelin Air-Aid proved beneficial in helping to reduce the conditions in which Microdochium Patch occurred on the trial plots. Plots that were treated with the Aer-Aid, with the air injection switched on, appear to have significantly less disease than the un-treated plots during a period of disease pressure throughout autumn."

The Aer-Aid can be used all year round on both fine and outfield turf, with its unique feature of moving air uniformly throughout the root zone - not just where the tines have penetrated.

"Overall, the SISIS Javelin Aer-Aid, from the research work we carried out, proved to be a very effective tool in helping to manage the soil profile, creating better rooting, allowing water and air movement through the profile, keeping disease at bay and helping to reduce compaction."

"My personal thoughts on the SISIS Javelin Air Aid, is that it is a very useful tool in any greenkeeper's or groundsman's arsenal, to help control and address key agronomic issues."

A video of these results can be viewed by visiting: https://www.youtube.com/watch?v=4tiCea3MA5Y