This fun competition has certainly proved to be one of our most popular with interest, photos and votes coming in from all around the globe.

In fact, receiving the most votes in the Best Photo category was one from Hawaii. It was submitted by David Klawitter and entitled 'Two Beauties', and David will be receiving his prize from Ian Camp, who runs SISIS Inc.

Voted the Funniest Photo was one submitted by Trevor Syrett - 'SISIS: so powerful even the pedestrian machines pul you off your feet.' Trevor will be receiving an iPod Mini for his efforts.

A third prize was on offer to a voter in the competition. The lucky person, randomly selected, is Nick Leslie from Newton abbott, and Nick will be receiving an iPod Shuffle. 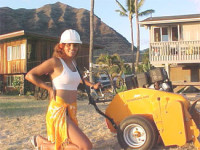 SISIS: so powerful even the pedestrian machines pull you off your feet