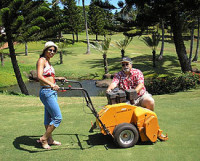 The prizes for the winners of the recent SISIS/pitchcare on-line Photography competition have now been presented.

The winner in the "Best Photo" category was from Hawaii, submitted by David Klawitter and entitled "Two Beauties". He has received hotel vouchers for a weekend break of his choice - and has sent us another photo to make us jealous!

David has been President of the Hawaii Turfgrass Association and on the Board of Directors for some 20 years, and is a keen user of the SISIS ROTORAKE 600 and SISIS VEEMO.

A third prize was on offer to a voter in the competition. The lucky person, randomly selected, was Nick Leslie from Newton Abbott, who received an iPod Shuffle.

SISIS send a final big "thank-you" to everyone who took part.