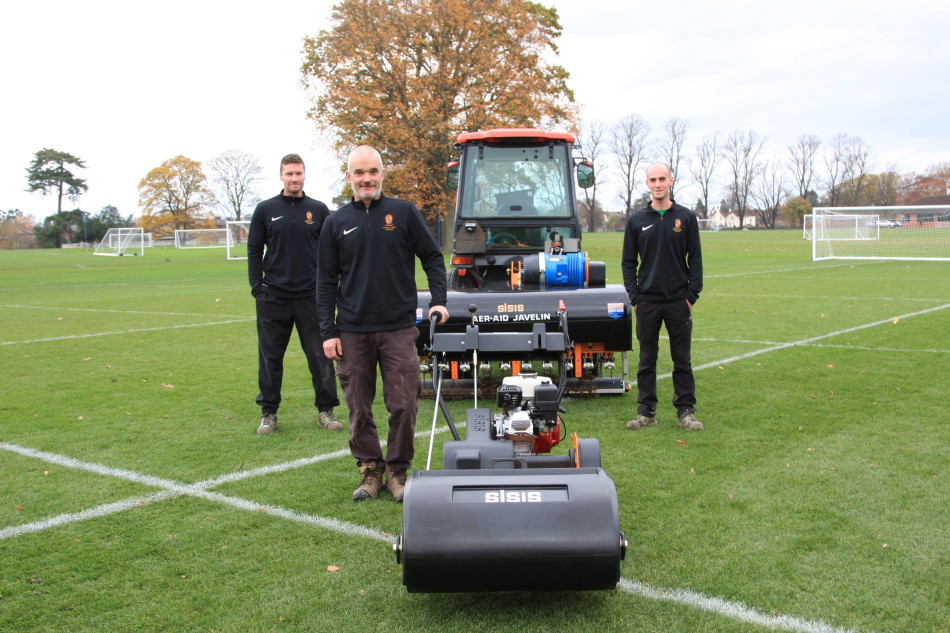 Shrewsbury School is one of the country's leading co-educational independent schools for 13-18-year-olds and attracts boys and girls from all over the country. It is one of the original seven public schools as defined by the Public Schools Act 1868, and its impressive list of previous pupils boasts a certain Mr Charles Darwin. In line with the work of its most famous "Old Salopian", the school continues to evolve in a dynamic way, achieving both outstanding academic and sporting results.

"We have a good blend of academics and sports at Shrewsbury School," says Andy. "Sport is a massive part of the School and there is a very strong house sport system - in fact the students are willing to run through a brick wall for their school and their house in sporting competitions!"

It is for this reason that Andy and his team leave absolutely no stone un-turned when it comes to preparing and maintaining sports pitches of the highest standard. In fact, cricket-writer Sir Neville Cardus once famously described them as "the most beautiful playing fields in the world, spreading and imperceptibly mingling with the pasture land of Shropshire". However, these truly wonderful facilities don't come easily.

Andy and his team work tirelessly throughout the year to provide sports pitches of the highest quality, and when it comes to his cricket wickets he puts his faith in the SISIS Auto Rotorake MK5

"We use the Auto Rotorake specifically for cricket because it does such a good job," says Andy. "The amount of material you can take out of a wicket with the brush reel and the verticutting reel sometimes needs to be seen to be believed. We use it all the way through the cricket season. In summer we do 30 match wickets a week and it will be part of the preparation for every one of those. From the middle of April through to the last cricket match in August we play host to approximately 250 matches and the Auto Rotorake is used on every one of those."

The SISIS Auto Rotorake MK5 is a powerful self-propelled heavy duty scarifier designed for the removal and control of thatch on fine turf. It features a contra-rotating reel with specially designed tipped blades for clean, consistent cut and maximum thatch removal. As Andy says, a variety of maintenance tasks can be carried out due to a selection of seven different interchangeable reels.

In further discussing his maintenance procedures, Andy pin-pointed aeration as one of the most vital.

"We have one of the highest pitch usages in the country. On each pitch we average 10-15 hours per week and we've got limited drainage. Therefore, one of the most important things we do is aeration and we aerate pitches all of the time. Grass lives and needs air like anyone else," he says.

Breathing life into Andy's grass is his newly purchased SISIS Javelin Aer-Aid tractor mounted aerator, and he had no problem in running it past the School's bursars - as he explains.

"It was the machine I wanted because I had previously trialled it and had good results. For example I Clegg hammered the pitches before and after using the Aer-Aid and had noticed a massive reduction in hardness. I know that the Aer-Aid had recently undergone extensive Sports Turf Research Institute (STRI) trials and it came out with excellent results - which always gives you confidence and makes it easier to explain to the bursars why you want to purchase it."

The Javelin Aer-Aid recently gained rave reviews from the STRI following a three month period in which extensive trials led by Dr Christian Spring were carried out. Described by Christian as "a very useful tool in a greenkeeper's or groundsman's arsenal," the Javelin Aer-Aid is indeed becoming the number one choice for many turf managers looking for the best aeration results.

With 10mm diameter 'tipped' tines working at 75mm (3ins) spacing, air is introduced from the Aer-Aid at a rate of 88 litres (3cu.ft.) per minute. These air injection tines are specially designed to use the maximum air available from the compressor and produces clean, fresh air, while also ensuring that surface disturbance is kept to a minimum. The cam trigger mechanism ensures that the air is always expelled at the bottom of the tine penetration, enabling treatment to be targeted precisely and consistently.

"It's a really good machine," says Andy. "It's easy to use and we can see significant improvements since using the Aer-Aid.

"For me, SISIS signals simplicity and reliability. It may be a cliché but the equipment does what it says on the tin and that's what I expect. The machines are built to last and I've never had any problems with SISIS equipment."