Formed in 1905 Sleaford Golf Club has an illustrious 100 year history which has been possible thanks to its dedicated greenkeepers who have been constantly committed to providing its members with a first class golf course. Now thanks to the recent purchase of SISIS TM1000 tractor mounted heavy duty scarifier, the private club's 600 plus members are set to see even more improvements 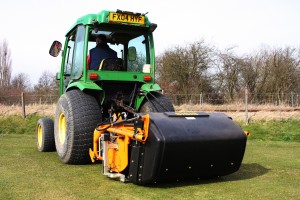 It was 1st March 1905 when Sleaford's prominent citizens gathered at the town hall to support the establishment of a golf club for Sleaford and District. Fast forward to 1910 and membership had risen to 176. Such was the club's fine profile that the committee succeeded in arranging a match, between Open Champion J H Taylor and former Open Champion, Harry Vardon on 10th May 1910.

From these promising early beginnings, the club continued to prosper and develop. Improvements were made when and where they were required and the growth in membership brought about the enlargement of other member-facilities. Sleaford's commitment to its members has remained and after a consistent disruption to the course, head greenkeeper Ian Batty, turned to SISIS.

"We've never had a lot of thatch here at Sleaford but we still need to hollow core to help reduce it. With hollow coring you obviously create quite a bit of disturbance and the members don't particularly like it especially as it disrupts playing time. We had to put a lot of dressing on to fill the holes up and you end up with a lot of sand stood there for 2 or 3 weeks, it's not really ideal but it was a necessity," said Ian.

Ian needed a solution and it was through an agronomist that he closely works with where he first heard about the SISIS Rotorake TM1000.
"My agronomist came in to take soil samples and we discussed what is happening and what we need to do. The last time he came, after taking samples, he said that the soil profile was excellent but we still need to keep thatch to a minimum. He told me to look at the SISIS TM1000 because he felt that it would be perfect for us."

The SISIS Rotorake TM1000 is a tractor mounted unit available with five quick release interchangeable reels to aid the removal and control of thatch and help reduce standing surface water by improving water infiltration. Like other scarifiers in the SISIS range, the Rotorake TM1000 works on the successful contra-rotating principle for a clean, consistent performance with a selection of blades to suit key seasonal tasks.

The machine features a floating unit to follow ground contours and as well as scarifying, the TM1000's interchangeable reels system means that it can undertake other tasks such as linear aeration, verticutting and brushing. The popular machine also has a 'no tools required' depth setting, ensuring that fast and simple adjustments can be made.

The weight of the collection box and material is carried by the main frame on the front roller and is totally independent from the reel, which means when the machine is in use, the additional weight does not force the reel to scarify deeper than the user has set it.

After finding out more about the machine, Ian called SISIS and a demonstration was quickly arranged.

"SISIS came to Sleaford and they gave me a demonstration. We saw it in action on one green; took one look at it and thought it was fantastic. Straight away I decided that it was the machine that I wanted.

"Following the demonstration, I put a report into the committee saying what the benefits were and that we would be able to cut down on hollow coring, which would mean less disruption to our members. I said that the TM1000 would enable us to carry out the work and that our members would be able to play straight away. Before, we would be off the greens for three to four days just to let them settle down and get the dressing in. The report went in and they gave me the go ahead to buy it." 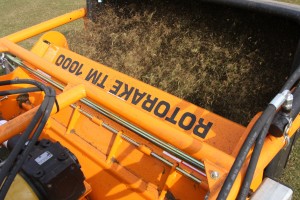 With his newly acquired SISIS TM1000, Ian wasted no time at all and put the machine to use straight away. He used it on all of the tees and with eighteen holes consisting of two to three tees on each hole; Ian was impressed with the machines performance.

"It took us a day and a half to carry out all of the work which was good. It left no debris at all, took all the worm casts off and scarified beautifully. It took off more thatch than what hollow coring would do and at the exact depth we wanted.

"The machine's best feature is that it is so easy to use. The hydraulic tipping unit means that there is no emptying grass boxes and I love the fact that it is has a quick, simple depth setting. With a lot of machines out there you have to undo bolts and you have to make sure it is right on both sides; the TM1000 just has a single adjuster on one side - it's really straight forward and saves time.

"I've been a greenkeeper for over thirty years and I've seen a lot of equipment on the market. In all those years there has been probably only two or three pieces of machinery that I've seen and instantly thought yep that's brilliant - and the TM1000 is one of them."