5 SISIS to the rescue

SISIS kicked off at Wolverhampton Wanderers to demonstrate their range of aeration equipment. Groundsman Wayne Lumbard is suitably impressed.

Here at Wolverhampton Wanderers FC we have, for some time, been looking at ways of improving our aeration programme. Any machines would need to fit on our two tractors (45hp and 20hp) which we use at the stadium and the training ground where, most of the time, we have a small window of opportunity, to work around the players' schedules.

At the moment we use our own VertiDrain machine behind our 45hp tractor which works very well, but, of course, we don't just want to vertidrain everytime, we also want to spike and keep the pitch open, especially when inclement weather is around, so we needed to look at some alternatives.

So, we spoke to Laurence at Pitchcare to ask what was on the market and, in no time, SISIS agreed to demonstrate three machines for us - the MultiSlit deep slitter and MultiTiner fitted with solid tines for the training ground, and the Aer-Aid air injection aerator at Molineux Stadium.

The AerAid can be operated on a low horsepower compact tractor which, with compaction and a heavy footprint usually a problem, was a big plus. Also, the other two spikers able to be used with a tractor as low as 20hp. One of the main benefits for us was the speed at which all these machines can aerate a whole playing surface, with little or no disturbance. Jason Briggs (Territory Manager) and Andrew Walker (Product Evaluation Manager) turned up at Molineux to AerAid the whole pitch.

Before we started Jason demonstrated the pressure at which the air came out of the tine and the effect of the tine at the moment it was inserted into the profile. The pitch was hard and had suffered with black layer for years, so it was a chance to get some air down into the roots and profile causing fissures along the way.

The whole job took a very impressive three hours to complete using a 30hp Kioti tractor. The AerAid worked at a depth of 4 inches, with no disturbance to the surface, using the optional rear rollers, which themselves were small in diameter, lightweight and followed any undulations as they went along.

We inserted a spike into the pitch before and after, and the difference was there for all to see. The pitch felt much softer, especially under foot. 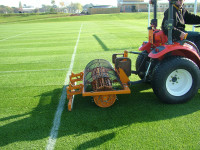 Our plan is to use the AerAid with the smaller compact tractor in the winter months when our larger Kubota tractor and VertiDrain would have to stay off the pitch.

There were areas of the pitch, the goalmouths for example, that we only wanted to spike and not to have the air injection on. This was not a problem - all it took was a lift of a lever and the machine went back to being a normal Sisis Javelin.

Three day later we had a training session on the Molineux pitch. There were fifteen players training for one and half hours on one half of the pitch and, after play, there was no more divots or scars than in any other training session, even though the pitch was softer under foot. So, no stability concerns there.

We then went onto the training ground pitches where Ben Lloyd (demonstrator) used the MultiSlit deep slitter and the MultiTiner drum aerator on our own 20hp tractor. He first used the MultiTiner on our reserve team pitch and the whole area was aerated to 4 inches in one hour and twenty minutes with no disturbance to the playing surface. He then moved on to the 6 inch MultiSlit on our first team pitch, which was, again, a very quick and easy process with no disturbance and great results. Both machines were easy to mount on the three point linkage, easy to maintain and very effective as the results show. 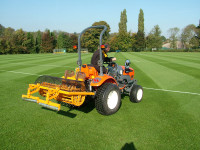 Tine replacement and prices are very good. All three machines ticked all the right boxes for us, including the prices. These are now on our wish list to the clubs secretary.

Finally, I would like to thank Laurence at Pitchcare and Jason, Andrew and Ben from Sisis for all their help, and who made it possible to have all our pitches aerated in record time!