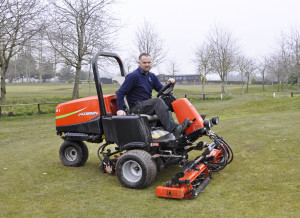 Six years ago Burghill Valley Golf Club near Hereford upgraded their fleet, with considerable help from local Ransomes Jacobsen dealer, TH White based in Tetbury. Today, the fleet is still going strong and is a testament to the build quality of the equipment and the maintenance regime at the club.

Steve Lloyd is the head greenkeeper at the 18-hole parkland course and manages a team of five greenkeepers. Commenting on the longevity of the equipment he said, "The previous owners of the club had a policy of renewing the course maintenance fleet every five years and during their time at the helm I used Toro and John Deere equipment. In 2007 it was time to implement the five-year change out and it coincided with Simon Bingham, a new territory sales representative joining TH

White. He was very accommodating and organised several demonstrations of a wide range of Jacobsen course maintenance equipment and a visit to see it being manufactured at the Ransomes Jacobsen plant in Ipswich.

"After trialling it against the other brands we opted for Ransomes Jacobsen as our preferred supplier and I purchased a Fairway 250, a TR3 tees and surrounds mower, a G-Plex III for the greens, an AR250 for the semi-rough, an Iseki 5470 tractor and Smithco Windstar blower." 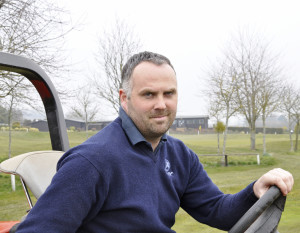 Steve is renowned in the region for the quality of his greens, with speeds of 12½ feet in summer, and he attributes that to the superb quality of cut from the G-Plex III with its brushes and groomers contributing to the excellent condition of his putting surfaces.

Back in 2007 he had one of the first Jacobsen TR3 rotary mowers fitted with rear roller brushes, which allowed him to get out early ahead of the golfers and provide a clean presentation, even when the grass wet from rain or heavy dew.

The club was acquired by new owners three years ago and due to the current economic climate they have decided on a 'replacement as required' policy, which suits Steve just fine. It gives him more control and flexibility over his fleet; with the older equipment performing well he can purchase additional equipment, so long as there is a good business case.

Emphasising this point he said, "Last season we replaced the AR250 with the latest version from Jacobsen, the AR522," he said. "The old AR250 didn't owe us a penny; it was working in excess of 40 hours week throughout the season and had performed exceptionally well. But it had come to the end of its working life, so I approached the owners and they didn't hesitate to support the replacement.

"Regular maintenance is the key; in the winter of 2011 the fleet was given a full maintenance overhaul and it is working as well as ever. Our partnership with TH White has certainly contributed to the longevity of our equipment; they are a very reliable, responsive and dependable dealer and the relationship is a solid one. Typically, they have helped the club with tournament support for a number of Pro-Am events."

About Steve Lloyd and Burghill Valley

Steve Lloyd left school in 1995 an joined Leominster Golf Club where his grandfather was head greenkeeper and his uncle was on the greenkeeping team. In 1997 he moved to Burghill Valley Golf Club as assistant greenkeeper and undertook block release at Elmwood College, travelling to Scotland for two weeks every summer over a four year period and gaining NVQ Levels 2 and 3.

During this time, the incumbent head greenkeeper emigrated to New Zealand and Steve was promoted to the vacant position at the age of 20 years old; 13 years on he's still at the club he loves. Over time he has revamped all the bunkers on the course adding contours, softening the faces and making them more forgiving for members, as they had been revetted by a former St Andrews greenkeeper.

The initial 9-hole course was constructed in 1990 as part of a farm diversification programme of the original owners, who grew blackcurrants and cider fruit. It was upgraded to a full 18 holes in 1992 and features irrigation on greens, tees and some approaches with all water sourced from the two lakes on the course. There are still some cider plantations dotted around the course and the fruit is harvested and sold to Bulmers.

Textron Inc. is a multi-industry company that leverages its global network of aircraft, defence, industrial and finance businesses to provide customers with innovative solutions and services. Textron is known around the world for its powerful brands such as Bell Helicopter, Cessna Aircraft Company, Jacobsen, Kautex, Lycoming, E-Z-GO, Greenlee, and Textron Systems. For more information visit: www.textron.com.