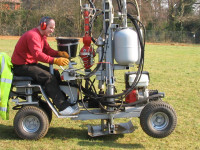 Football and Rugby players at a Surrey Sixth Form College are hoping to use their entire pitch next season, for the first time since it was built.

Goldalming College, had a new winter games pitch constructed in 1991, but severe compaction beneath half the surface brought water logging each season restricting the area of play.

Bob Bailey, M.D. of Commercial Grounds Care, the Surrey based grounds- maintenance contractors blames the use of heavy machinery during construction for the problem. "We've been looking after the playing fields here for the last eleven years and implementing a full aeration programme during spring and autumn," he says. "As there was no improvement we had a survey done and dug a test pit which revealed a hard pan 18 inches below the surface at the access and exit areas."

Bailey hired Suffolk based Terrain Aeration who performed deep, compressed air de-compaction treatment over approx. 4,000 sq. metres using their Airforce Scamper terralift machine. Working at two metre spacings, the company forced the 1 ¼ diameter probe, one metre below the surface injecting compressed air to create underground fractures and fissuring. Dried, milled seaweed was injected on the final air blast, which will swell on contact with moisture, keeping the fissures open. Steve Oates, who performed the operation over two days says that the probe encountered resistance about two thirds of the way down. "I had to employ the machine's hydraulic hammer 99.9% of the time," he remembers.

With the season almost over and a dry summer forecast it will be next season before Bob Bailey can assess the success of the operation. "I'm very pleased with the way Terrain Aeration carried out the work," he says. "I hope it works as a full drainage system would cost around £100,000 to install!"

For further information on the deep, compressed air de-compaction treatment provided by Terrain Aeration contact the company on Tel; 01149 673783 or visit their website at: www.terrainaeration.co.uk