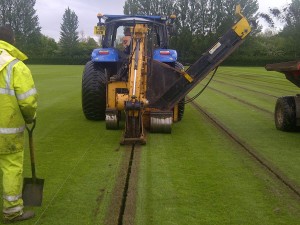 As part of an annual on-going renovation project carried out by Souters Sports, slit drainage at two-metre centres was installed this summer on the club's first team pitches, similar to that laid last year on the U21's/18's match pitch. The academy area had further investment with the Koro slit drain.

"The idea of supplementing the pitches' main drainage with a slit system is to help keep them in play even in the wettest winter conditions. It's important we have the contact from the top of the surface to the drain so we get the most out of the infiltration rates," said Stoke City head groundsman Andrew Jackson.

The club's heavy and daily use of its training complex means yearly close season refurbishment is essential, and it gives an opportunity to upgrade the surfaces. Souters Sports' work at Clayton Wood, now in its sixth year, is a four-phase operation on a strict timetable which ensures continuous availability of some of the soil-based pitches during the latter stages of the season and guaranteed that the two first team pitches were ready for the start of the season. 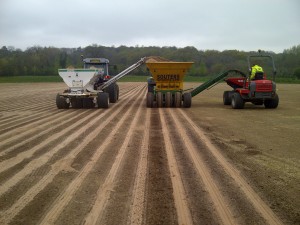 The contractor's Koro machines stripped 70,000 square metres of turf systematically from all of the pitches on the complex, followed by Koro slit draining or injected sand bands across all pitches, followed by the usual Verti-draining, topdressing all 70,000m² of land before re-seeding of all surfaces with the 100 per cent ryegrass mix with Limagrain's MM60 which is known for its rapid germination and disease resistance. All eight pitches were re-seeded in four directions: three ways by disc seeding and one by dimple seeding.

Souter Sports in-house workforce was on site seven days a week until completion. Mark Higgs was in charge of the project for the contractors, who also worked in conjunction with the club's pitch advisers PSD.

"The depth of the sward on the academy pitches with their new slit drainage is excellent, as it is on all eight of the pitches at Clayton Wood," said Andrew.

"All the pitches looked and played superbly from the off. Yet again Souters did a great job for us in a very tight specified schedule."