by Ashley Loveridge
in Football and People
on 28 Sep 2019

Slimbridge AFC officials say they can scarcely take in the enormity of their success on the national stage. 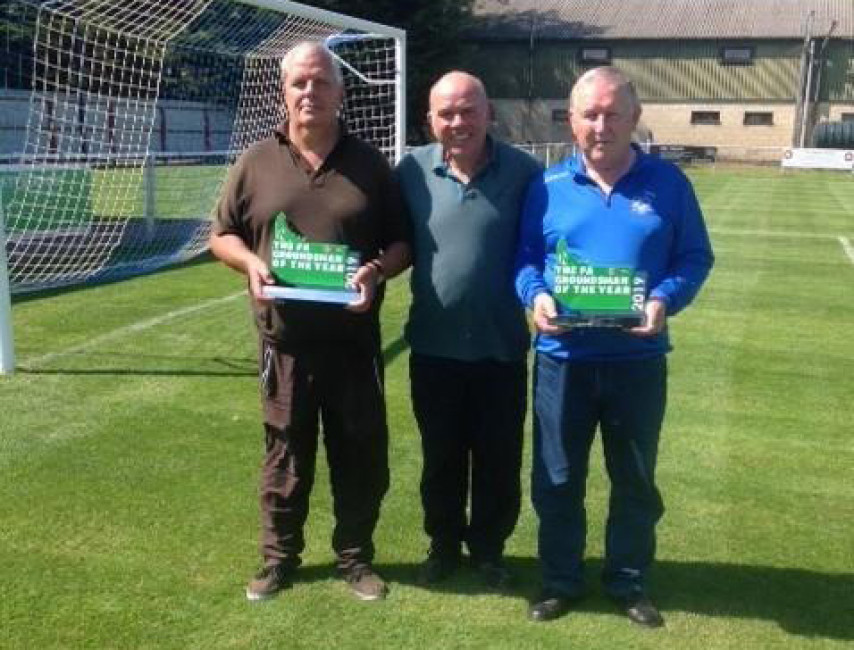 The Swans were stunned to learn that not only had their dedicated ground staff claimed a top Southern League accolade at the recent annual FA Groundsman of the Year Awards but that they'd gone on to scoop first prize in the national hand-outs relating to step 3 and step 4 leagues and clubs on the semi-professional circuit.

Slimbridge's head groundsman Paul Chappell and Malcolm Carter, two of a trio of trusted and talented pitch-keepers along with Ian Wrixon, set off for the awards ceremony at St George's Park, the FA's national football centre in Burton upon Trent, Staffordshire, hoping at least to be a strong contender for a Southern League gong.

Their delight at seeing off three rival candidates to win the regional award turned to exhilaration a few minutes later when they were informed they had seen off all rival challengers in the same non-League step 3 and 4 category countrywide to claim a treasured national trophy.

"For this to happen to a small village club up against big towns and cities with the resources to match is fantastic and it's down to the fact everyone works their socks off to maintain our status as a Southern League set-up."

The journey to national acclaim has been fraught with challenges too. Colin explained: "We once had a local guy, David Whincup, who did a terrific job looking after our pitch over many years during our Hellenic League days."

"When he retired a few years ago we were in turmoil; it was a case of getting anyone to cut the grass and prepare the pitch for matchdays and in all honesty we didn't have anything like the surface we enjoy today during our first two years in the Southern League."

"Then along came Paul Chappell, who had been involved with the club for well over three decades, as a manager too in his early days here when we were in the lower leagues."

"He had retired from his garage business and was looking to fill his days with something different, so he set about the groundsman duties and dealt with our applications to the FA for funding."

"That happened around two seasons ago and things have improved beyond recognition, although he is the first to lay credit too at the door of Malcolm Carter and Ian Wrixon, who are both also retired."

"Ian used to be treasurer here and is very involved with Forest Green Rovers these days too, while Malcolm is a real handyman with us, directing traffic on matchdays and serving food to players after games and the like."

"They're all volunteers and it's amazing what they do on a daily basis. When they're out there working on that pitch they won't stop for a drink; they just want to crack on!"

Of the "quality" Wisloe Road playing surface that has now received national acclaim, Colin insisted: "People are so complimentary about the pitch. We played Yate Town in a pre-season friendly and their manager Polly (Paul Britton) told his players they wouldn't have a better pitch to play on all season.

"Even after a game it looks as though nothing has happened to it, regardless of the weather."

"When Paul and Malcolm went up to the FA centre for the presentations, they really didn't know if they'd win anything. All they were told was to turn up as there was a Southern League award up for grabs."

"We'd had a pitch inspection at the end of last season when groundsmen from Spurs and West Ham came down representing a panel of inspectors. Ian showed them around and reported to us they'd been very impressed with what they'd seen."

"Paul and Malcolm were naturally delighted to receive the top groundsman prize in the whole of the Southern League but thought that would be it."

"A few moments later they were left flabbergasted as Slimbridge's name was called out for a national award."

"I know our chairman Barry Gay, my brother, was overjoyed and rightly so as we wouldn't be where we are today either were it not for him, a real driving force behind the club's progression."

You can read the original article from the Gazette Series HERE