Attending this year's conference was a very interesting and rewarding experience. The opportunity to meet up with so many committed, friendly supportive greenkeepers and industry suppliers from several different countries was in itself a privilege for me, as the editor of Pitchcare.

It is always nice to meet up with professionals from the Greenkeeping world and talk about promoting the industry.

Now in its seventh year, the Slovenian Greenkeepers Association Conference is gaining a high reputation for bringing together a varied and interesting package of guest speakers from all corners of the sports turf industry.

Gorazd Nastran organiser and Chairman of the Slovenian Greenkeepers Association ensured the conference ran efficiently and that hospitality provided to delegates was second to none. To his credit, Gorazd had managed to attract some eminent professors and industry professionals, namely Professor Alfred J. Turgeon, Professor Joseph Vargas, Melvin B. Lucas and Stephen Bernard to the conference as guest speakers.

The conference was held in the Hotel Dobrava ZRECE, SLOVENSKE KONJICE, Slovenia a spacious four star hotel, surrounded by the scenic Slovenian hills. Facilities, service, quality and choice of food were all exceptional. On the Wednesday evening guests were treated to dishes prepared by Slovenia's top chefs, employed especially for the occasion. The food served proved to be exquisite in every respect. 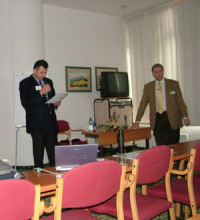 The first day of the conference featured presentations by Al Turgeon, Joseph Vargas and Mel Lucas on a range of subject areas that covered:

The following day three presentations were delivered to delegates in the morning. Stephen Bernard gave an insight into tournament golf presentation. His presentation focused on the importance of mower sharpness, visual aids used included a wonderful set of golf course pictures from around the world. His pictures emphasised the importance of keeping mowers sharp. This was followed by two presentations by Al Turgeon and Joseph Vargas on developing an appropriate fertiliser plan and patch disease identification.

In the afternoon the delegates were taken to see one of Slovenia most demanding golf courses, the Ptuj Golf course. The Ptuj is a fairly new course that was opened in 1999 and is privately owned and thus not run by a greens committee. The club is well equipped with a wide range of machinery. Seven staff work at the course and like employees at many new courses, they are keen to promote sustainable environmental practices to reduce the use of fertlisers and fungicides.

The club has recently acquired a new wash down facility that encompasses an environment waste collection service, whereby all the accumulated waste is stored and 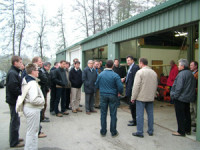 The Ptuj golf course is one of only eight golf courses operational in Slovenia.

Another golf course viewed by delegates featured a small nine-hole facility that had been developed around a vineyard. Dejan Brecko the manger was responsible for managing both the course and vineyard.

After this visit guests wined and dined at the Zlati Gric and were treated to some local entertainment. The evening started with some wine tasting, followed by a warm meal and live music provided by some Hungarian Gypsy's playing traditional instruments. Later they played an interesting version of an Elvis song, this was accompanied with great gusto by Joseph Vargas, to the amusement and delight of all the delegates.

Entertainment aside, the main aim of the conference was to bring together a number of international service providers and thus enlighten and inform European practicing Greenkeepers of their products and services.

Gorazd should be commended on his sterling work on raising the profile of golf in Slovenia and other European cities of which he gets plenty of support from golfing bodies such as The Federation of European Golf Greenkeeping Associations (FEEGA) and the European Golf Association (EGA).

The following table gives details on the number of golf clubs now affiliated to the EGA.


Table of information Published by the EGA


The EUROPEAN GOLF ASSOCIATION (EGA)was founded during a meeting held in Luxembourg on the 20th of November 1937.
The Association declares as its foundation the observance of the Rules of Golf and Amateur Status as laid down by the Royal & Ancient Golf Club of St. Andrews.
The Association concerns itself solely with matters of an international character. Membership is restricted to European National Amateur Golf Associations, Federations or Unions.