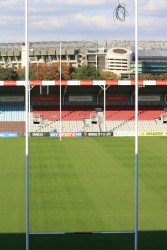 Soluble quick action fertiliser has traditionally been the groundsman's standby to improve turf performance, but this 'quick remedy' approach can lead to all sorts of problems.

The soft leaf tissue growth which is evidenced by a sudden flush of green grass is weak and susceptible to disease, while potential nitrate losses in into the drainage system are a real risk, particularly with unpredictable spring showers.

Costs are increased by the need for fungicides to treat disease, while the penalty for nitrate pollution is both financial and environmental.

Leading clubs such as Aberdeen FC and Harlequins RFC have recently carried out successful trials to evaluate the benefits of slow release fertiliser.

British Seed Houses' Sandy Pentecost explains: "Slow release fertiliser incorporates nutrients which are available when the grass is able to utilise them. This means more efficient use of the groundsman's resources, optimum growth without flushes and the peace of mind that the environment is not being put at risk."

Paul Sykes of contractors MCR Sports Turf Management trialled a Floranid slow release programme along with British Seed Houses' A20 and Ryesport mixtures at the Twickenham Stoop in 2009.

He explains: "We made four applications at a rate of 30g/m at 7-10 week intervals. I found Floranid very easy to use and highly cost effective. It gave a rapid response without a huge flush in plant growth after each application and the sward maintained good consistent colour and general health for the entire year. This is something we have struggled with in the past using regular compound fertilisers alone, which created a 'boom and bust' type growth habit." 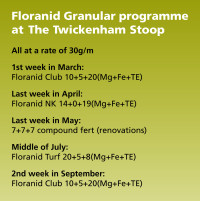 Paul reckons that the Floranid granular programme offered a saving of about 25 per cent in fertiliser costs, although per bag the material is more expensive than a regular compound fertiliser.

"On the surface, this can put customers off, but cheaper products as we all know can often cost you more in the long run. There has also been the saving in application time as we aren't putting on as much fertiliser over the course of the year, freeing up staff to complete other tasks," comments Paul.

"Overall I've had a more consistent surface; we have improved our root growth by 20 per cent, which for me is very significant. Like many rugby surfaces, ours is prone to cutting up in the wet of winter. November 2009 was one of the wettest months on record and the Stoop pitch is the best I've seen it in five years for this time of year. Yet, we have had well over 100 hours of play since August.

Paul says that even spectators have made comments on the general condition of the ground.

"I put this improvement down to the combined use of the A20 and the Floranid fertiliser as my management strategy and techniques have altered little from the previous season."