0 Snow - should you remove it or leave it where it is? During the last two winters there has been lots of talk about snow on greens. Should you remove it or leave it where it is? What about a layer of ice on the greens, will the grass die under such a layer, should you try to crack it or leave it alone? If you remove the snow and then have weeks of freezing east winds, will the grass die of desiccation or should we leave it there but risk snow mould damage?

Lots of questions where you will not find the answer in a text book.

In this article, Ian Tomlinson, Course Manager at Rungsted Golf Club in Denmark, gives his point of view on the above questions, what has worked and what has not

After fourteen years working in Switzerland managing golf courses, and now ten years in Denmark, I have had my fair share of experience, but you are always surprised by Mother Nature.

In Switzerland, it was normal to have one metre of snow most winters and very low temperatures. Snow could fall anytime from October onwards until April. At that time, we were all lucky to have a Scotts fungicide product containing PCNB (pentachloronitrobenzene). This has since been removed, but the results were outstanding. We applied the product hours before the first snow fall, then usually dug the greens free of the snow on 1st March and found perfect greens. You would not remove the snow mid winter.

But, where do we stand today? In Denmark, where legislation has removed almost all pesticides and we have only a systemic fungicide available to use - which is no use whatsoever in autumn and winter - how do you keep greens disease free?

The first issue is to address the botanical composition of the turf on your greens and the growing environments. It is certain that, if you are promoting poa annua dominated swards, in our environment you will lose your turf every winter.

I am not saying that if you are promoting fescue/bent turf that you will have no problems, you will. The difference is that, when the poa is attacked, the whole plant is damaged, including the crown, and you end up with a bare depression on your playing surface. With fescue, the plant will be attacked but survives and, as soon as favourable climatic conditions allow, the greens will regenerate and be perfect again in a matter of weeks. The poa greens will be scarred and bumpy, and may take anything up to two to three months before an acceptable putting surface can be produced.

Our best greens are the ones with 80% fescue/bent grasses in them and no shading issues from trees. Other greens, growing in wooded areas where sunlight and air movement is an issue, have more poa annua and, invariably, end up with major snow mould damage. In the winter of 2009/2010 we experienced a hard winter. We were lucky that the greens were frozen before the snow fell. This situation will certainly help limit your disease damage to the turf. You then have another issue as half way through the winter there is a thaw, but the green is frozen and the melted snow has nowhere to go and you end up with water on the putting surface. It freezes again and you have a few centimetres of ice now on top of your turf. Under this situation, poa will survive up to thirty days before it dies of asphyxiation. Fescue/bents can go between sixty to one hundred days.

Another issue is that, if there is a great deal of direct sunshine on the ice but too cold to melt it, the ice can act as a magnifying glass, scorching the grass. On many occasions, I have run the verti-drain across the greens with the tines set just deep enough to crack the ice and stop at the grass canopy. You cannot remove the ice, as the grass leaf blades are frozen into the ice, but this will allow for vital air to get through to the grass to avoid suffocation. I prefer to risk a little turf damage by doing something rather than leaving the ice and risk running into scorching greens, which happened to me one year in Switzerland. Last winter, we left the snow on the greens and, as warm air was forecast, we started to remove the snow by February. If you have a large volume of snow on the greens and the temperatures are rising, removal of the snow is a good thing. The greens came out clean. I was very pleased but, twenty-four hours later, I had lost five greens to snow mould. I had never experienced this situation before.

The winter of 2010/2011 proved to be another tough one for us. Rain fell mid November and, the next day, 30cm of the white stuff came down. The greens were not frozen. This situation is dangerous. I have seen snow mould fungus up to 30cm in diameter, covered in mycelium, form in less than twenty-four hours under this condition. The temperature fell to minus 12OC, yet the snow insulated the green and the turf surface was still not frozen. We removed the snow as the forecast was for more to follow. The greens were clean but, as the temperature was hovering around minus 10OC, the greens now froze. Perfect scenario. The snow returned, but we were a lot more relaxed. We had decided that we would remove the snow on the greens in shaded environments, as and when necessary, and leave the good greens out in the open covered. The snow was down for ten weeks. The result was no damage by snow mould.

In contrast, the remainder of the course has been seriously attacked. Fairways on the seven holes which grow on 18m of peat, and have high smooth stalk meadow grass content, really suffered due to these soils holding more moisture, and a grass species more susceptible to disease. The other fairways, with higher, finer grass content and a better clay soil, have a lot less damage. We had only five days when the temperature rose above freezing since the middle of November to March.

In my experience, fescue greens will get attacked by snow mould, but it is not an issue. They play just as normal, firm and true and the discoloured blemishes disappear very fast in springtime. It seems that young fescue turf is attacked quite easily by snow mould in the first few years, but then seems to build up a resistance as seen in the photos.

Some colleagues state that removing snow off the greens in mid winter can cause just as much damage to the grass by desiccation. I have personally not experienced this. One winter, I had greens with no snow cover but minus 25OC and no damage. Again, dependant on the grass types you have, can give a different outcome. Once again Poa annua is top of the list of grasses susceptible to death by desiccation, and fescue the least.

In summing up, prepare your greens going into autumn with no available nitrogen.

Harden off the turf with as much iron sulphate, potassium sulphate and seaweed as you can. 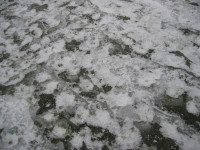 Aerate as much as possible, and try and leave the holes open before the snow comes.

Promote good cultural practices to keep disease at bay by removing dew, and good woodland management around your greens to allow air and sunlight in.

Direct your greens management programme towards favouring the finer grasses over poa annua. The day fungicides are removed, you will be glad that you did.

If there is a risk of snow mould damage due to weather and environmental conditions, remove the snow.

If a layer of ice has formed on your greens, try to crack it by any means possible.

I hope that some of this information will help you decide what is the best course of action to take in the future, as global warming becomes more of an issue and fungicides are removed by the E.U!

Buy from Pitchcare's wide range of Snow Removal products in our online shop.