0 So good they bought another!

So good they bought another!

Proof that the Articulator range of rotary mowers are, "built for a world that isn't flat" can be found at Blairgowrie Golf Club this month, where Course Manager Alan Holmes takes delivery of his second machine in four years. 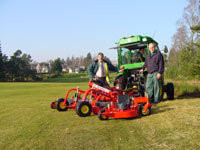 The club, situated approx 50 miles north of Edinburgh at the foot of Glen Shee (known for its ski resort), has three courses, Rosemount (18 holes), Lansdowne (18 holes) and The Wee Course (9 holes).

"We are on a glacial deposit of gravel and stones with only four or five inches of topsoil" says Alan. "The club is over 100 years old, and originally hosted Rosemount and The Wee Course, both of which would have been cut from the heathland and pine forest mostly by hand. As a consequence, these two courses have very acute undulations on the fairways and semi-rough, but any large scale smoothing out would mean importing topsoil from elsewhere, and threatening the unique character of this heathland environment. We only undertake minor renovations, and in each case are careful to backfill with identical material from elsewhere on the course and use a matching root zone.

In 1999, Alan Holmes, who has been course manager at the club for 11 years, chose a seven unit Articulator, the 721X, above two other multi headed rotary machines, following a demonstration at Blairgowrie. This year, after a similar exercise he has bought the newer 721XR model, supplied by The Double A Trading Company of Cupar, Fife, Lastec's sole Scottish distributor.

"We found on both occasions that the Articulator could cut at a height of one and three quarter inches without scalping," says Alan. "One machine can deal with the semi-rough on all our courses, and the articulators work comfortably with our 35 hp. tractor. Nothing else could give quite the quality of cut and performance."

Blairgowrie's old Articulator is still going strong and will work alongside the new machine.