0 So you Think you have Nematodes?

In the August/September issue of Pitchcare, Dr Kate Entwistle discussed the growing problem of plant parasitic nematodes. Kate described some of the major plant nematodes found in cool season turfgrass and outlined our knowledge regarding the biology and management of these pests, as well as possible interactions with fungal pathogens. 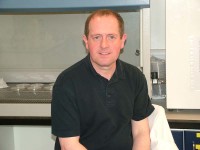 In a short series of articles I hope to discuss some of the major issues relating to these increasingly important pests and provide an update on developments in their control and management.

One of the first questions I am asked when visiting a golf course or pitch is "Why have nematodes only become a problem in recent years?" The obvious answer is, of course, that nematodes are found in all soils and they have always caused damage to the plants we grow.

Most farmers will be familiar with a variety of plant parasitic nematodes (eelworm) causing damage to their potatoes, carrots or cereals. Similarly, any greenkeeper who has spent time working in the warmer US states will be able to relate horror stories of damaged greens, complaining golfers and seemingly endless applications of pesticide. The growing nematode problem in the European turfgrass industry may result from a number of factors:

So, assuming that these pests are becoming increasingly important, how do you know if you have a nematode problem?

Unfortunately, visible nematode symptoms in turf are fairly general and non-specific, which means it is usually impossible to confirm the presence of nematode damage without a laboratory analysis of the plants and rootzone. The nematodes themselves are microscopic and distinguishing the pests from the beneficial nematodes can be technically demanding and a job for the expert.

Endoparasitic nematodes actually enter the root, where they migrate through the plant, before starting to feed. Some specialised endoparasitic species such as Meloidogyne (root-knot nematodes) establish and maintain complex feeding sites around the plant vascular tissue, but both ectoparasites and endoparasites can manipulate root morphology and physiology to support their parasitic way of life.

Equally important are the physiological effects seen in plants:

1. Energy demand - Nematode parasites divert significant amounts of photosynthate and nutrients to their feeding sites around the roots. This is made worse by reductions in the level of photosynthesis. This can occur shortly after the start of nematode feeding and represents a significant loss of energy for the plant.

2. Water Uptake - commonly we see changes in water uptake, stomatal conductance, root conductance and wilting. The water shortage results in a range of effects inside the plant including decomposition of proteins and nucleic acids, disruption of plant enzymes and decreases in nutrient uptake, solute movement and chloroplast activity.

3. Nutrient Uptake - abnormal morphology and root destruction results in the disruption of the flow of micronutrients and macronutrients.

Root damage will disrupt their synthesis, so explaining the common symptoms of stunting, leaf senescence and an uneven distribution and decrease in nutrient concentration in shoots.

Plants will respond to any root-dysfunction with symptoms related to deficiencies of nutrient or water, and the following symptoms may indicate that you have a nematode problem in your turf:

So, as a turf manager, how can you determine if you have a potential nematode problem in your greens or pitch?

What to look for above ground

What to look for below ground

There are other useful questions to ask:

In turf containing mixed grass species, what types of grass are showing symptoms?

Samples submitted for nematode analysis contain a wide variety of nematode types. Most are beneficial bacterial and fungal feeding species, but up to fourteen different types of plant parasite are regularly detected in UK turfgrass. Each has its own distinctive effect on plants and, because of differences in their biology, a range of techniques may be needed to manage them.

Next time we will have a look at the range of management techniques which have been used to control nematode damage in turfgrass and get the views of some turf managers who have been actively dealing with the problems over the last few years. 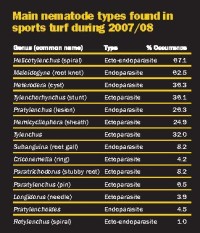