0 Leeds United - Socket to me! 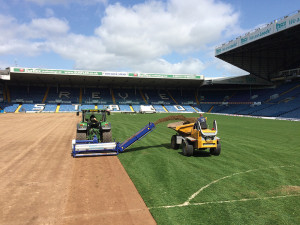 When Kiel Barrett took over as Head Groundsman at Leeds United just under three years ago, it was unlikely that he ever considered he would be preparing pitches for rugby union matches at the Elland Road stadium. But, with the Rugby World Cup being staged later this year, that is exactly what has happened.

There are a good number of football clubs in the Sky Bet Championship with an illustrious history, all trying to get back into the Premier League. None more so than Leeds United who, this past season, finished comfortably mid table. Considering where they were just a few seasons ago, that should be seen as success of sorts, but the fans and the club are desperate for a return to the big time.

Everything about the club smacks of 'top flight', with a huge fan base, a modern stadium and one of the best playing surfaces outside the Premier League. Maybe next season ... 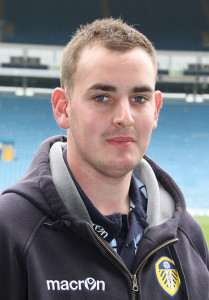 Tending the pitch for the past three years in his capacity as Head Groundsman has been Kiel Barrett, a young man whose career path began at Headingley Carnegie, before taking up his current position at Leeds United.

This departure from the norm is both exciting and challenging for Kiel and his team, and preparations have been ongoing since the club learned of their successful bid to host the games back in 2012.

The games take place over the weekend of 26th and 27th September - smack bang in the football season - and the club have needed to arrange their fixtures to accommodate them. "The only issue might be that the previous week is 'cup week', so I hope we get an away draw!" confesses Kiel.

The pitch was reconstructed in 1970, with sandy soil, then ash was used as drainage on top of the clay. In 1988, the under soil system was installed, which is still in use today and, in 1990, the pitch was modified to FibreSand, and has been this ever since. During this year's renovations, we actually added more FibreSand, as well as performing all the usual tasks. We had to make the pitch playing area 95 metres long, and are having an RFU standard 3G surround installed, along with increasing the run off from the touch line to the boards from 3m to 4m."

"We've also invested in two of SGL's MU50, and one MU360 lighting rigs, which have helped enormously, and are currently looking to get two more MU360 rigs. We are also updating the stadium irrigation system so we can get better head to head coverage." "When installing the rugby sockets, we were able to dig down to see what else the pitch is constructed of. We found that the north stand
side of the ground was on ash, rubble, glass and bricks, with a white martial under that, along with an ash layer. The south stand side of the ground was just clay. We only came across one clay pot drainage pipe and that was at the south stand end of the pitch."

"We are using the Harrod UK 17m rugby posts with the hinge points, along with the three
point linkage machine which will help push the posts up."

"Four weeks before the rugby matches we will use an Air2G2 across the pitch and then, once again, the week following the games, with an overseed and a light topdressing of MM45 sand."

"James Brierley from PSD has been here doing all the pitch testing. He has been very helpful and I've been able to pick his brains on all manner of issues. I believe that PSD will be coming out again one month before the games to test and help advise on the pitch so as little damage is caused to the playing surface as possible."

"I have also been w 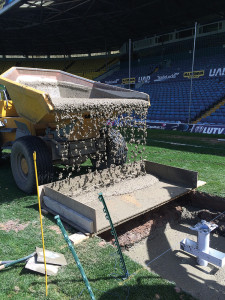 orking on a fertiliser programme. We are looking at using Sierrablen and Pro-Turf in the month leading up to the games."

"The plan is to cut to a height of 35mm for the rugby matches but, if we do get a home cup tie, then I'll have to come down to 28mm for that."

"Myself and Oliver Brown look after the stadium pitch on a day to day basis, whilst Stefan Jones, who is the assistant head groundsman, George Edwards and Wayne Simpson maintain the Thorp Arch training facilities. We also have one summer casual, Oliver Pickard, who has been with us over the past three seasons."

"We'll have three groundstaff at the ground on Friday for the training then, over the weekend of the matches, all six of us will be in attendance. We will need to return the pitch to football as soon as possible, and I reckon that should take us no more than five days. Exciting times, and I'm looking forward to the challenge."