This harvest, the Soil Association is urging cereal farmers not to spray Glyphosate on milling wheat crops - to reduce the amount of this probable carcinogen turning up in British bread 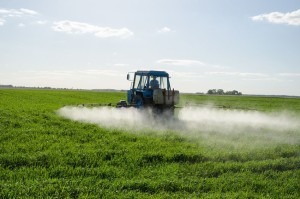 Three months ago, the World Health Organisation's International Agency for Research on Cancer, concluded that 'Glyphosate is probably carcinogenic to humans'.

Glyphosate use in UK farming has increased by 400% in the last 20 years. It's one of the three pesticides regularly found in routine testing of British bread - appearing in up to 30% of samples tested by the Defra Expert Committee on Pesticide Residues in Food (PRiF).

As far back as 2012, the NFU-supported Voluntary Initiative on pesticides advised farmers to take care in their use of Glyphosate, saying Glyphosate was one of the two pesticides most frequently found in British food, and that it was regularly found in cereals on sale in the UK. Current advice to farmers is that Glyphosate should only be used when wheat grains are hard and will not absorb the herbicide. However, recent reports suggest that in the case of at least one combinable crop, oilseed rape, it is being sprayed too early. Given the regular occurrence of Glyphosate in bread, it is clear that current advice about application is inadequate to prevent British flour, bread and other wheat products being contaminated.

Peter Melchett, policy director at the Soil Association said; "We cannot ignore the World Health Organisation's findings that Glysophate is a probable cause of cancer - the risks are too great. Previous voluntary attempts to limit the occurrence of Glyphosate in bread have failed, so the Soil Association is calling on farmers to avoid using this herbicide pre-harvest this year on wheat crops, in particular those that might go for milling."

The levels of Glyphosate found in bread are below the Maximum Residue level (MRL) set by the EU. However, the MRL was set well before this latest determination by the WHO. In addition, the MRL for Glyphosate has always been a matter of controversy, because, if glyphosate is an endocrine disrupter as some scientists suggest, there may be no safe lower level for human consumption. Whatever the MRL, research into public opinion shows that the presence of any chemicals in food is one of the main health concerns for consumers, especially those with children.

The Soil Association has also written to all major UK Supermarkets and large bread businesses including Kingsmill, Warburtons and Hovis to ask them how they plan to produce their bread in the light of this new evidence.

To read the full article and comments, click here.