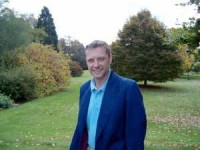 In order to manage turfgrass we need to have a basic understanding of soils and the impact that the soils condition has on the grass.

Brady and Weil (2002), list six things that plants obtain from soil, in no particular order, these are;

The physical support is provided by the root system anchoring the plant to the soil, this helps to keep the plant 'in-situ'. Several benefits arise from the plant remaining in the soil, not least of which is that the surface remains playable, however; traction, erosion control and a degree of "shock absorbency" are also important to the playing surface and its performance, without this the playability of the surface may be compromised.

Plant roots need to respire to obtain energy, like us they also take in oxygen (O2), and give out carbon dioxide (CO2). Through the pores in the soil, CO2 escapes and O2 enters the soil profile. This process is also helped by maintenance practices such as aeration which assists gaseous exchange to take place. It is not only the plant which requires O2 from the soil. Soil micro-organisms also require O2 and release CO2 in fact, microbial populations have a similar demand on the O2 in the soil as the plant population (Rowell, 1994). The greatest need for O2 lies in the upper 100mm of the soil profile where there is the largest concentration of soil microbes and turfgrass roots.
Poor O2 concentrations in the soil, lead to what is frequently termed, anaerobic conditions this usually occurs in heavily textured soils. The critical time for this, is curiously in the summer during wet periods not in the winter - demand for O2 is not as high in the winter. O2 is usually restricted by one, or a combination of the following:

Ø A soil with a high water table.

Ø The soil overlies a clay subsoil which holds up the water table artificially, this is more commonly termed a perched water table.

Ø Compacted, heavily textured soils are likely to have poor pore spaces this effects the rapid transmission of water through the soil profile.


Under anaerobic condition, a process known as reduction will occur, this causes denitrification and the also the production of organic compounds which may affect plant growth. The appearance of mottling in the soil is an indicator that this process is underway. Patches of grey, orange and dark brown indicate poorly drained soils.

One common symptom of this process known all to well, by many turfgrass managers is the formation of Black Layer (figure II), which occurs when sulphur or sulphur derivatives, such as sulphate are reduced to the sulphide in the form of hydrogen sulphide. This gas combines with metal ions in the soil like iron (Fe), to form the corresponding sulphide. 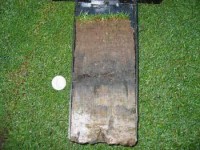 The soils ability to hold or release moisture is vital to the turfgrasses survival. It is known that plants consist of between 75% to almost 90% moisture but a decrease in only 10% can cause the death of turfgrass. Water availability is therefore critical to turfgrass health. The amount of water present in the soil also has an effect on the physical properties of the soil. For example the strength of the soil will increase as the soil becomes drier.

The moisture status of the soil depends on the type and arrangement of the soil particles as this dictates the amount and size of the pore space. Soil is often considered as a three phase system, consisting of air, water and soil, (sand, silt and clay) figure II. Some organic matter is also usually present and will make up between 3% and 5% in typical soils. The air and water occupy the pore spaces between the soil particles. If the soil is oven dried then the pore spaces are only filled with air, conversely if the pore spaces are filled entirely with water, no air is present.
When all the pore spaces are filled with water, the soil is said to be saturated. This would occur after a period of prolonged/heavy rain or irrigation. After a period of time, 1-3 days, some of the water will have drained from the soil under the effects of gravity; this water is removed from the larger pore spaces (macropores), in the soil. When the soil has reached this state it is considered to be at Field Capacity, (FC). At this time air has replaced the water in the macro pores, gravity is unable to remove further water.

Figure 1: Soil as a three phase system based on a typical silt loam soil when in a condition for good turfgrass growth.

Water in the soil is held between the soils particles by tension, the smaller the pore space the greater the tension exerted on the water. Gravity can only remove a given amount of water from the soil before the amount of tension on the water in the smaller pore spaces can not be overcome.
Plant roots are able to exert and extract water from the soil to much higher tensions than gravity; however at some point even the turfgrass roots cannot remove further moisture from the soil. When the soil has reached this condition it is said to be at Permanent Wilting Point, (PWP). It should be noted that moisture is still present in the soil it is simply unavailable. Figure III.

The amount of pore space and the size of the pores will dictate the amount of water that can be held by the soil. Soils are made up of varying amounts of sand, silt and clay, the degree of aggregation of the particles is also variable. This is why different soils have differing amounts of soil moisture at a given state. Table I shows varying moisture percentages for different soils at given states.

Note the percentage of water that remains in the soil at permanent wilting point. Water is present but the roots cannot exert enough tension to remove it.
Turfgrass roots can therefore only remove water between the two conditions of field capacity and permanent wilting point. The moisture available to the plant between these two states is referred to as Readily Available Water, (RAW).

Toxins within the soil may be the result of human activity, plant roots, natural chemical reactions or micro-organisms. Organic chemicals are usually broken down into simple non-toxic compounds, however; metals and other toxic elements leave a residue which may be permanent unless leaching occurs (Rowell, 1994). Fortunately the trend today, is for organic fertilizers and pesticides. Which hopefully are leaving no long term traces within the soil as the compounds are degraded.

Nutritional balance in turfgrass is importance for both survival and growth. The availability of the 16 essential elements (see figure IV), will determine how the turfgrass responds to environmental stress, recovery from damage, susceptibility to diseases and wear tolerance to name a few. While turfgrass managers may not be able to do much about the three elements which make up some 90-96% of a plants dry weight (Carbon, oxygen and hydrogen) as these are obtained predominantly from water and atmospheric sources, the remainder should be considered as a consumable resource obtained from the soil and which will require replacing at some stage. The soils water content, pH, structure and texture as well as the turfgrass species, density, and vigour coupled with climatic conditions will combine to affect the requirements of the plant and the availability of the nutrients.


Soils also have a facility to compensate for nutrient losses, by way of a process known as "buffering".
In well buffered soils, while the plant removes its needs and some nutrients are lost, perhaps through leaching, the concentration of nutrients in the soil are maintained. A sandy soil for example can easily have nutrients added, but they are also easily lost, the opposite of this would be a clay soil, where the plants removal of nutrients only has a small effect on the overall amount that is held by the soil.

Each of these areas has a specific effect on turf grass and as we have looked at could be considered individually. It should however be apparent that if we affect one aspect we may to a greater or lesser extent affect one or all the others. A single maintenance practice carried out, perhaps to address a single issue or problem may in fact produce further benefits or indeed problems. It is this inter-relationship which needs to be understood by the turf grass manager.