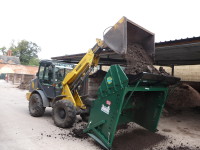 They salvaged 2000 tonnes of usable material (following testing for the correct composition) for various applications around the course.

Although this quantity of usable waste was an exception, Craig decided to invest in a Raycam Soil Screener PVG-96 from Campey Turf Care Systems. He has been using it regularly since to filter surplus soil accumulated through on-going maintenance and construction work around the course.

Broken down turf, debris from reconstructing walkways, old bunker sand, and excess soil from excavations on the course produces up to 50 tonnes of waste soil annually.

By using a Raycam Soil Screener to filter it effectively, most of the soil can be recycled for applying as a top dressing or rootzone material. This is ideal for leveling the surface in the turf nursery and replacing soil in worn areas such as pathways where the footfall is greatest.

"The Soil Screener is a real asset to the course." said Craig "It is easy to operate and highly maneuverable. In the past we used to call in a contractor and they could be on site for two weeks dealing with the accumulated waste, now we screen it ourselves whenever we want to, it is an excellent investment."

The Raycam Soil Screener PVG-96 is a portable vibratory soil screener powered by a 6.5hp petrol engine. It produces a vibratory motion via a twin eccentric action and is designed for loading with tractor buckets or skid steer loaders.

It is capable of re-cycling and screening sand, soil, gravel and various other materials for use on golf courses and sports fields. Standard screen size is 19mm with an additional 10 screen size options. Additional features allow the flow of material to be controlled by changing the pitch of the screen and restricting the volume of material passing over it.

Campey Turf Care Systems is one of Europe's largest independent grounds care machinery suppliers. Over the years Campeys have earned a reputation for offering practical advice and superb aftercare service.