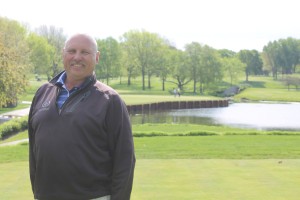 Rick Tegtmeier, who is based at the stunning Des Moines Golf & Country Club (DMGCC) in Iowa, can now add 'MG' to the CGCS which he acquired in 1985.

Rick and the team are undergoing a huge renovation project to update the fabulous 36-hole facility ahead of the Solheim Cup's arrival in 2017, including rebuilding tees, rebuilding some greens, bunker redevelopment and the construction of new paths.

The tournament will be played across a mixture of the club's North and South courses, with the Junior Solheim Cup also taking place simultaneously on the other 18 holes. Rick recently attended the Solheim Cup at St Leon-Rot in Germany with a contingent from DMGCC to observe and learn how the event was managed.

The 18 handicapper becomes BIGGA's 67th MG since the Certificate was first awarded in 1991. He said: "I was very surprised, and elated, when I got the call to say I had passed.

"I'm 56 years old, and the only person I have to prove anything to is myself, but I'm jubilant to have succeeded and it shows I can still keep up with the younger guys! It's a real sense of accomplishment.

"Combining a major renovation project with studying for the Master Greenkeeper Certificate, and fitting in a trip to Europe, has been trying this fall, but I've now completed two of the three with the project still to finish."

Stage One of the Certificate involves a review of the candidate's training, education and experience, while Stage Two is an assessment of their golf course, which is carried out by two Master Greenkeepers.

He said: "Some failure doesn't hurt, and it just made me more determined to succeed. Being an international member, you sometimes wonder whether you are on the right track with things, but I obviously managed to get to grips with it this time."

Rick's greenkeeping career began as a youngster at Rockford Golf & Country Club in Iowa, and he used a student loan to attend turf school at Hawkeye Community College.

He first joined Des Moines in 1983, working on the North Course, and harboured ambitions to take the Director of Grounds role at Des Moines. But when Bill Byers CGCS, the Previous Director of Grounds, explained to him that he had no plans to move on, Rick secured a position at Elmcrest Country Club in Cedar Rapids, 100 miles east of Des Moines.

He spent 17 years there before Bill retired, and he finally got his dream job in 2006. Rick's son Nate is North Course Superintendent, and it was Nate who convinced his father to go for the MG certificate.

Rick added that he has many people to thank to get to this level of his career. They include his wife Sherry, the members of DMGCC and General Manager Jim Cutter. Also, he paid tribute to his two Superintendents Tim Sims and Nate Tegtmeier and their teams for all of their hard work and efforts.

BIGGA's Head of Member Learning Stuart Green said: "Rick would be the first to admit it's been quite a long road for him, and as he is also in the middle of a major project ahead of Des Moines hosting the Solheim Cup it makes his fantastic achievement even more notable.

"An international BIGGA member achieving the MG demonstrates that this qualification reaches beyond the UK and is well-recognised as the ultimate achievement in greenkeeping across the world.

"Dealing with Rick throughout his 18-month journey to become a Master Greenkeeper has been an absolute pleasure for us all at BIGGA."