Martin Sampson, Head Groundsman at Cardinal Vaughan School, is always mindful of spending his budgets wisely and getting value for money. This was again the case when he was faced with a choice of either returfing or re-seeding an area (1300m2) of his first team football pitch that had been covered for thirty-one days during the 2008 Autumn Series of international rugby matches at Twickenham. 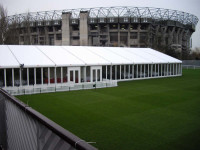 The School lies within a stone's throw of the stadium and earns income from letting their ground out to the RFU for car parking during matches, and from corporate hospitality, much of this being ploughed straight back into the facility. And, of course, the RFU benefit from having quality pitches nearby for training and practice.

One of the busiest times for Martin is during the lead up to an international match, when the surfaces have to prepare for over 1,000 cars and a 1,300 square metre marquee, which overlaps the 1st XI pitch. The Investec series saw four back to back internationals, which meant an area of the pitch (one of the penalty boxes) was covered for thirty-one days from 4th November.

Before the marquee base went down Martin mowed the grass, fed it with some 4:0:10 with turf hardner and punched holes into the soil profile.

However, Martin was debating whether to turf or seed the area once the marquee was removed, bearing in mind he needed the pitch back in play by January. Having done some research, and comparing the substantial cost saving between seeding and turfing (some £13k), he decided he would trial Barenbrug's new BAR 50 SOS seed mixture. 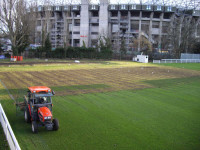 Martin contacted Neil Pettican, the company's Regional Sales Manager, who explained that, although SOS would not give him an instant playing surface, he believed that it would provide a sufficient surface for the first game in January, improving from thereon with additional overseeding. Neil explained that there was a risk involved, although due to the substantial cost savings it was a choice that he would take in the same situation.

Neil's decision was based on the results from extensive laboratory and practical field trials conducted by Barenbrug Research together with UK field trials he had personally seen in January 2008. 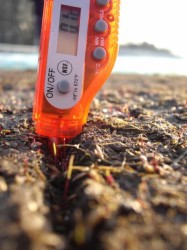 With the seed having been sown on 9th December, Martin was concerned that he had seen no signs of germination after eight days. Neil visited on 19th December and said that he would not be too concerned at this stage, although the slightly below average temperatures were a bit of a worry.

However, the first signs of germination appeared on Boxing Day, seventeen days after sowing. A delighted Martin contacted Neil to relay the good news and arranged for another visit on 8th January. Now there were signs of good germination, but the area was not at the stage both would have hoped for. In addition, the whole pitch was saturated from the earlier snow.

Neil felt that the existing grass would not be damaged if Martin wished to further overseed the area. They discussed methods of application and it was agreed that a dimple seeder would be less aggressive than a disc seeder. Martin sowed a bag of BAR 7 on 13th January.

However, following the heavy snowfalls and deep frosts early this year, the first match was put back. There was not a lot that could be done, but the snow had assisted the germination and, surprisingly, the root structure of the plant was developing very well. 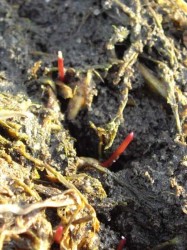 Neil visited again on 10th February and there were plenty of green shoots. There were also signs of some algae developing on the soil surface, probably due to the snow cover. It was agreed that the pitch needed to dry out before any more work could take place.

On the 18th February, and with the weather conditions improving, Martin discussed his plans with Neil. These were to lightly rake slit and brush with a Sisis Quadraplay to break up the soil surface and control the algae, apply a further bag of SOS and apply a 12:12:12: fertiliser and irrigate.

The pitch eventually had its first game on the 28th February, just twelve weeks after the marquee had been taken down. After the match it was noted that the area had held up very well indeed, and a further five matches were played over a two week period.

With no fixtures for two weeks, during early March, Martin overseeded and applied 4:0:10 +9% fe fertiliser, and covered with germination sheets. The area was now showing 70-80% grass coverage.

It has been a good exercise for both Martin and Neil and they can attest, with some confidence, to the performance of BAR 50 SOS in quite difficult weather conditions. In hindsight the only thing Martin would do different would be to perhaps overseed with SOS before the marquee was put up.

Although the turfing option would have been an instant fix, it came at a much higher price. In Martin's case study it was all about assessing the options available and having the nerve to go through with his final decision to seed. 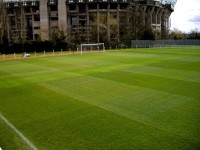 The objective of the breeding programme that produced 4IR-1 was to introduce desirable amenity characteristics, such as wear tolerance, combined with a leaf width and colour similar to a sports perennial ryegrass, without compromising the remarkable cool temperature germination and establishment. 4IR-1 is the successful selection from thousands of progeny from that breeding programme.