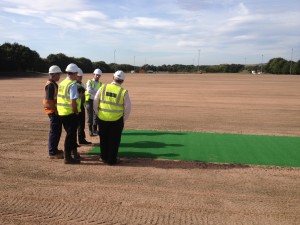 Following a highly competitive tendering process, leading natural sportsturf contractors Souters Sports have recently completed the redevelopment of the natural sports pitches at Sheffield Hallam University. Souters' in house labour and plant combined with their ability to provide a high quality service was certainly a key factor in securing the contract.

The company were also tasked with the responsibility to bring the cricket wickets in to play for April 2013 and both the football and rugby pitches in to play for the new academic year in September.

The contractor worked closely with the client to develop a strategy for all construction work that ensured no waste material was transported from the site. The resulting reduction in vehicle movements, retention of valuable void space in landfills and minimising waste are all practical 'green' benefits, meaning there was no disruption to the local landscape or nearby residents.

The construction of new pitches involved extensive earthworks which meant that the soil was all utilised on site for levels using specialist laser levelling equipment on the dozers.

Equipped for the 21st century, the company owns, maintains and operates a modern fleet of plant and equipment meaning that excellent progress was achieved in spite of the wet weather seen last year.

Sheffield Hallam has a long term sport strategy and the investment in the new Sports Park is key to achieving that. The redeveloped site is now known as the Sheffield Hallam University Sports Park after its major revamp to create international standard rugby and football pitches, versatile synthetic pitches and a brand new sports pavilion named after Graham Solley, the University's former head of sport.

"Souters Sports were very professional and experts in their business," said Matt Summerhill of Rider Levett Bucknall UK, the contract administrator. "The project wasn't without its difficulties due to the weather, but Souters Sports dealt with it in a professional and considerate manner. I cannot recommend them highly enough".