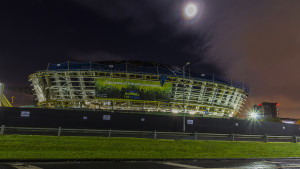 Souters Irrigation Services (SISL), a specialist arm of sports turf contractor Souters Sports set up in 2010 to handle irrigation refurbishment and installation projects, have been awarded the contract to design, install and maintain an irrigation system for Scotland's newest landmark, The Hydro.

Once completed, The Hydro will become a new landmark on Glasgow's skyline. The SECC national arena is the only one of its scale in the UK built specifically for concerts, conferences and events.

The irrigation system will consist of over 13,000 meters of Dripline over 10 sectors. The planting will be Buxus Sempervirons (box hedging) densely planted to form a green mat.

The new venue will enhance Glasgow and Scotland's tourism offer with the arena playing an integral role in the 2014 Commonwealth Games as the home for both gymnastics and the netball finals at the games. The Hydro will be in the top five busiest indoor entertainment arenas in the world alongside such iconic venues as Madison Square Gardens in New York and The O2 in London.

"This is a fairly unique building with some unusual challenges for the irrigation system", said Robert Smith, Sales and Technical Manager at SISL. "The irrigation is situated on the raised banking areas which is also suspended above the ground and encircles the arena at varying widths and pitches".