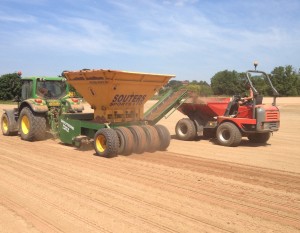 Sandal Rugby Club in Wakefield, Yorkshire has entered a new exciting era in their long history with two new pitches constructed by Souters Sports, one of the UK's leading natural sportsturf contractors.

Souters worked on the site using their specialist sports surface construction expertise, machinery and technical knowledge to deliver the project on time and on budget.

After spraying off the area, the area was then ploughed, subsoiled and cultivated. The areas were then trimmed with a level frame utilising the current topsoil depths to grade out any undulations. A mains and lateral drainage system was then installed followed by Koro Top Drain Sand Slits by Souters' in-house team.

The area was then finally cultivated and trimmed using specialist rota rakes in several directions to provide an even seed bed. As a specialist contractor, Souters Sports takes its environmental responsibilities seriously and was committed to ensuring the project was developed in a sustainable way.

Wherever possible, all material was retained on the site and special attention given to retaining the biodiversity of the area, helping to reduce the financial and environmental impact of the project. Special care was taken during the project to maintain two public footpaths during the works with fencing and signage to protect the public.

After the final cultivations and pre-seeding fertiliser application, the site was then seeded. Both pitches are expected to be used for light use from November 2013 onwards before both being brought into full use for the 2014/15 season.

Souters Sports will be carrying out the initial marking of the pitches and installing new goals at the end of October.

Careful planning of the project and communication with local farmers for an alternative access route to the site maximised the use of equipment and labour and dramatically reduced the programme to just six weeks.

"Souters Sports were very professional throughout the project and the works were completed to a high standard," said John Hacker of PSD. "We have an excellent working relationship with them. They managed to complete the project in a tight time-frame and their continued attention to detail is very impressive."

Robert Heath, Contracts Director at Souters Sports said: "The quality of the work we do is a direct result of the skill and attention to detail of our dedicated in-house staff, plus our continual commitment to investing in state-of-the-art specialist equipment."