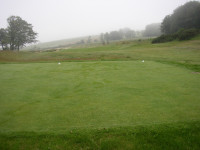 The picturesque Duke's St. Andrews, owned by Kohler Co. has made a major investment in the quality of its championship course having just completed a major construction project of its tees, bunkers and a renovation programme involving sand-banding and coring the fairways.

Souters Sports Ltd was appointed to construct the new tees and bunkers, with the emphasis on keeping the golf course open during the construction and renovation works. This project was quite unique in that all the construction works were completed during the main playing period of this year, making optimal use of the better weather and ground conditions expected at that time of the year.

Temporary tees were in place for holes if necessary but this was kept to a minimum for the time that the work was carried out and now the course benefits from five separate tee positions at every hole.

The bunkers also went through a complete transformation, being reshaped, drained and sculptured to make them more aesthetically pleasing, consistent and strategic.

Additional bunkers were also added to some of the fairways and around the new greens, and strategically positioned. 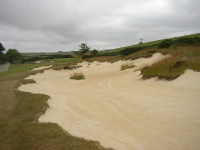 The Duke's is regarded as one of the finest Heathland Championship Courses in the British Isles and a 'must play' course for any golfer. Its style ranks alongside the great inland challenges which demand accuracy and inventive play as well as power golf.

Derek Robson, Head Greenkeeper has been very happy with the way the project has come together and has achieved his aim of replacing the tees and bunkers without too many problems and inconvenience to the members of the club.

This, he puts down to good organisation, planning and communication between all parties involved who have all worked hard to achieve the aims of the club.