by External source
in Schools & Colleges, Industry News, Synthetics, and Football
on 15 Jun 2016 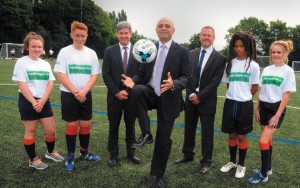 The project was funded by the Football Foundation (Premier League and FA Facilities Fund) which put up £500,000, Sport England which contributed £150,000 and Bromsgrove District Council which gave £40,000. That was match-funded by the school.

The natural grass pitch, replaced with the 3G AGP, was prone to waterlogging.

The unveiling of the hub came three-and-a-half years after the start of the project led by South's PE teacher Dave Baylis who worked with the Worcestershire FA and football foundation.

Mr Baylis said: "We know we are very fortunate because we go to other schools and play on other pitches but they are not as good as this.

"The roll of the ball and the bounce is consistent all the time and that helps players improve their game.

"We have already seen improvements in students of all abilities during classes that have been held on here.

"It's an outstanding football facility for the community."

As well as being the home ground for the school's football team and being used for games lessons, Meadow Park FC are also playing games there and it is anticipated 59 new teams will be created over the next five years.

The West Bromwich Albion Foundation will also use the site to deliver holiday soccer schools and player development schemes.

A strong emphasis is being placed on supporting football opportunities for women and girls and there will be 14 teams playing at the site by the end of the plan. There is also a focus on developing disability football coaching sessions, encouraging inclusive curricular sport by linking with local schools Chadsgrove and Rigby Hall.

The school is working with Soccer Sixes, affiliated to the FA, and will also be supporting Worcestershire Schools FA with County training and fixtures. Teams can also hire the surface by e-mailing 3g@southbromsgrove.worcs.sch.uk to book or find out more.

"I can already see the enjoyment the young people are having playing on this pitch.

"And it's not just the school, but the whole Bromsgrove community which will benefit from it for many decades to come."

You can read the full article from the Bromsgrove Standard HERE