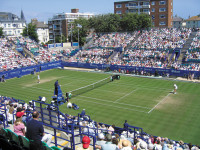 The International Women's Open tennis championships will be held at Devonshire Park from 14-21 June 2008 guaranteeing more tense battles for an expected record crowd of spectators.

The WTA Tier II event has been held at Eastbourne's Devonshire Park since 1975 with last year's championship drawing the biggest crowd numbers in the event's 32-year history. More than 40,000 spectators are expected in 2008 to support a thrilling tournament that stands as the main pre-Wimbledon event.

Eastbourne Borough Council Spokesperson for Tourism, Councillor Steve Wallis, is delighted that the tournament is returning to Eastbourne again this year. It is a major sporting event, not just in Eastbourne and the southeast region, but internationally too, with top tennis stars from around the world always keen to take part. "The championships have been an important part of the town's history for many years and I can't wait to see what exciting contests 2008 will bring" he says.

Eastbourne's oldest park probably dates from around 1873 when the Devonshire Park Company was set up.

A guide, dated 1893, describes a music garden with facilities for cricket, tennis, racquets and roller-skating. A ladies "cycle academy" is also mentioned. The first major tennis championships were held in 1881. The Council began purchasing the facilities in about 1929.

The facility is managed by Eastbourne Borough Council who employ four staff to maintain the tennis facilities. Andy Bacon (Grounds and Tournament Manager) and Roy Charman (Turf Manager) are the longest serving staff members with well over forty years service between them, together with Danny Garbett and Danny Negus who are relative newcomers.

Roy has completed two stints at Devonshire Park, the first way back in the late 1970s when he began his career in groundsmanship, and the second when he returned from a life of travelling around the world in 1995. Roy still enjoys travelling and usually finds time to travel during the winter months when the courts are closed. This year the championships are being staged between 14th and 21st of June. It is a one-week lawn tennis tournament, which always precedes Wimbledon, giving players the opportunity to experience grass court play.

The staff maintain twenty grass courts, eight of which are temporarily redundant during the championships when parts of the grounds are used for stands.
The courts are very old, dating back to the late1800s, and were formed on some old reclaimed land. There is approximately 300mm of natural soil overlying a bedrock of sandstone and, for this reason, the courts drain very well. No formal drainage systems have ever been installed at Devonshire Park.

Preparations for the tournament begin towards the end of the previous year's playing season with end of season renovations in early September.

The club prepares twelve grass courts for the championships, six for competition and six for practice. During Roy's time at the club they have been using Surrey Loams graded organic sports turf dressing (GOSTD) clay loam for topdressing, building up a decent 150mm topsoil profile.

The clay content of the current loam being used is around 18%. Roy is toying with the idea of reducing it to 15% in the coming years to combat the effects of climate change, it will enable him to control the rate of cracking on the courts.

Roy aims to complete the renovation within a six week period to make good use of the favourable weather and soil temperatures in September.
The courts are cut to 4mm, and heavily scarified, taking out as much debris as possible, in four to six passes using a Graden tractor mounted scarifier down in stages to a depth of 7mm. All debris is then cleared away and the courts are cut down to 4.5mm.

Germination is usually quite quick; about 5-7 days as soil and air temperatures are generally good in September. Once the grass is established it is maintained at a height of 8mm throughout the winter months using a cylinder mower.

Weather permitting the courts are aerated at least twice a month using the vertidrain and pedestrian aerators to a depth of 15/25cm and a combination of tine sizes. The pre-season works starts with an application of spring fertiliser in April using an assortment of Headland products based on the results of a soil analysis. Over the years Roy has worked closely with his supplier, to develop a successful feeding programme for the courts.

A combination of growth regulators, wetting agents, seaweed extracts, humic acids and traditional NK fertiliser products are applied during the course of the growing season. All are applied in liquid form for greater flexibility.

The height of the sward is gradually reduced, in 1mm increments, to their summer playing height of 7.5mm.The staff complement the mowing regimes with fortnightly verticutting. This helps keep the sward open and standing up.

A fully automated Rainbird pop up irrigation system is used to water the courts. It proves very useful when applying fertilisers and wetting agents, which is carried out on a monthly basis. Roy will generally apply the water in several cycles to ensure watering to depth of at least 150mm.

Roy's first priority at the start of a new season is to get the five practice courts up and ready for April 20th when the club members playing season starts. Work is then focussed on the match play courts ready for the championships.

This involves a lot of additional work for the staff. As well preparing the courts, they have to oversee, and help position, cameras, canvas, cables, staging and seating for over 2,000 people. The council draft in an additional thirteen temporary staff to help with the movement of covers and other duties.

Rolling begins two weeks prior to the tournament, using a 1.5 tonne roller, for up to ten hours per court. The optimal conditions are when the ground is moist, but not too wet.

The verticutting is continued and mowing is done on a daily basis, with the height reduced to 7mm for the tournament. To ensure the courts are not too green and lush the last fertiliser application is at least two weeks before the event begins. Last year they applied a liquid mix containing Turf Complex, Seamac ProTurf and N-sure with chelated iron and manganese to stimulate colour and growth.

Hover covers are used for the centre court and court number one, and flat sheet covers, similar to the ones seen at Wimbledon, for the remaining courts.

The daily maintenance routine begins at 7.00am during the tournament. Covers are removed and the courts are then mown and marked out. It takes about 45 minutes to mow each court, and 15 minutes to mark out. A dimple wheel-to-wheel transfer marker is used to produce the 100mm wide base lines and the 50mm tramlines. Nets and posts are finally set up ready for play.

At the end of the day's play, between 7.00-8.00pm the staff strip down the nets and posts and put the covers back on.

Once the tournament is over the courts are soaked heavily to open them up for repairs, which consists of a very light scarification, a light application of top dressing and overseeding. All being well the courts will be back in good condition for the next tournament, in three weeks time.

Finally, once the season comes to a close it is a case of starting the whole process again beginning with the end of season renovations which, in turn, will dictate the quality of the courts for next year's championships.