Southampton Football Club have been at their 'new' home, the St Mary's Stadium, for just over ten years. The name reflects the club's history; they were formed in 1885 when at team from St. Mary's Young Men's Association played their first match on the 'backfield' of Hampshire County Cricket Club.

After over one hundred years at their former home, the rather quirky 'The Dell', with its odd, almost wedge shaped stand behind one of the goals, the club's move to St. Mary's saw a dip in their fortunes as they slid down the leagues. Now, currently riding high in the Championship, a return to the top flight looks on the cards, and the quality of the playing surface is a contributing factor. 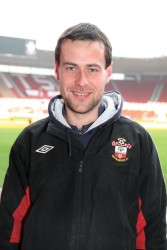 Managing the surface is Andy Gray, one of the youngest Grounds Managers in the country. He was promoted to the role one year ago after a spell as joint head groundsman after Dave Roberts had left the club for Charterhouse School. Dave and Andy had not been involved too much with the original laying of the pitch as they were still working at The Dell.

By modern standards, it is a relatively basic design, built over a gravel raft/carpet with primary drains running at 3m centres, a 50mm binding layer of grit sits on top, which was originally covered with a 200mm depth of 80/20 rootzone. The rootzone was, at the time, 95% sand, 2% silt and 3% clay, and laid totally flat, i.e. with no crown.

This original pitch specification brought with it some serious drainage problems that Dave and Andy had to try and overcome. It took them a couple of years to find out the exact cause and begin remedial work. The problem was that, after heavy rain, the pitch did not drain effectively, water was being held in the shallow (200mm) sand profile by capillary tension. In scientific terms, the hydraulic drive was not enough to push the water through the shallow profile - a shallow, perched water table was preventing any free draining.

Most modern pitch profiles have at least 300mm depth of rootzone materials, thereby giving the necessary hydraulic drive to push water through into the primary drainage system. The 300mm depth enables the pitch to build up enough weight of water to help push it into the drainage layer, thereby allowing the pitch to meet its specified drainage rates, often designed to cope with 25mm of rain per hour.

The ideal solution would have been to reconstruct the pitch. However, for various reasons, that option was not taken. So, the only other option was to carry on with appropriate aeration works and then, over time, begin to increase the depth of rootzone during end of season renovations.

With no crown on the pitch, surface water was an additional problem, so the team, now without Dave Roberts, had to create one. Both issues were resolved by removing 10mm of vegetation, using a Koro, after weedkilling the pitch, power harrowing and topdressing with 350-400 tonnes of sand, carefully adding a crown, and returfing with 40mm thick, big-roll turf.

By 2008, Andy had achieved much of the desired results, and ongoing renovation has given him a profile of around 290mm, which is now draining very well. Following the returfing, the pitch has since been reseeded after renovations.

Like most stadium pitches, the time to complete end of season renovations seems to be getting shorter. Last year, Andy had less than seven weeks to get the pitch back up and running, due to the club hosting an England U21 match on the 5th June.

Andy fraise mowed the pitch, topdressed with 90 tonnes of sand and then hired a linear aerator from Kestrel to aerate the pitch at 50mm depth, before overseeding with sixteen bags of DLF Pro 81. He then applied twelve bags of 8:12:8 granular fertiliser.

The pitch was then earthquaked at 200mm centres to help restore levels. The first cut was on the 23rd June using pedestrian rotary mowers. The pitch has an integral, automated irrigation system allowing efficient watering of the pitch any time of the day or night.

The first cut with the Dennis G760s was carried out on the 7th July, with the first set of matches - a triangular tournament - scheduled to take place on the 23rd July. Feeding and mowing was increased to maximise grass growth.

PrimoMaxx was applied, at 1.2 litres per hectare, to help increase sward density and root mass whilst, at the same time, helping to reduce the amount of clippings taken during each cut. The pitch is maintained at 25mm all year round.

The pitch is cut regularly using the Dennis mowers, and is also brushed and verticut to help stand the sward up and help clear any surface debris.

A range of liquid feeds are applied to ensure the grass plant remains healthy, vigorous and retains a good colour.

On match days, three full time staff are on duty and seven regular volunteers come and help repair the pitch after the game has finished. Andy has a team of four full time groundstaff to help him. Graeme Mills is his assistant, along with Danny Silvestri, Peter Hall and Ian Lucas.

It is important to replace the divots and heal over any scars. Depending on the time of the year, and when the next fixture is scheduled, usually dictates what other jobs need doing.

The club has recently invested in three SGL MU360 lighting rigs to help promote grass growth during the winter months. They only arrived in December, but have already made a big difference. There is only enough power available for one half of the pitch, so Andy is still experimenting with their use. Currently, they are set to run for forty-eight hours before moving to the next position.

The club have been aware of the benefits of having lighting rigs for a number of years, as Dave Roberts actually made his own - a single two lamp rig - many years ago to help stimulate growth in the goalmouths. This led to another larger, self-build rig by Ian Lucas, at a cost of £2,500; both are still in use.

For a number of years now, Andy has topdressed the stadium pitch during the winter months with a tonne of 80/20 kiln dried sand and Zeolite on a monthly basis. This helps maintain air porosity and aids the retention of any applied fertilisers. This practice has helped to prevent the build up of black layer and algae.

Andy also tries to keep any heavy machinery off the pitch during the winter months. He does like using the pedestrian rear roller type rotary mowers for cutting and 'hoovering' the pitch after matches; it may take much longer, but he is very pleased with the results. For the time of the year (January), the pitch looked in excellent condition. Andy is also a stickler for removing the dew off the pitch, it is done religiously on a daily basis.

Andy relies on Mark Atkins from Soil Harmony and Derek Cunliffe from Rigby Taylor to help produce his recommended feeding programme, using a combination of granular/ liquid and bio feeds to maintain a healthy balanced sward. Wetting agents are applied to help keep the pitch functioning and allowing deeper, consistent penetration of feeds and water. A preventative fungicide programme is used to combat leafspot and fusarium.

End of season renovations are relatively straightforward. All the pitches are either scarified, using an Amazone flail, or fraise mown to clean out debris, then vertidrained and topdressed with 450 tonnes of sand, before overseeding with a ryegrass seed mixture.

Andy is doing a fantastic job. Like so many of his peers, he is dedicated to producing the best playing surface for his club using the resources he has available. He has a good team and, between them, they are confident the playing surface they produce is equal, if not better, than any on the south coast