"The trip to Scotland to see the new Castle Course was just unbelievable. Meeting all the head greenkeepers over a fish and chips lunch was particularly useful and inspirational" 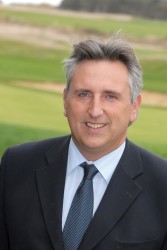 When asked if he's a keen golfer, Paul Searle pauses to consider the question. "I would describe myself as an observant golfer," he replies.

Suddenly, Searle's ambitions in building a brand new 18-hole golf course at Heacham Manor hotel near Hunstanton on the North Norfolk coast become crystal clear. Because here, there is no golf-mad owner building a personal playground, or experienced course manager leading the project. Just one man with a deep admiration for the industry's finest links courses and a keen eye for detail.

An established family business, Heacham Manor is Searles Leisure Group's latest venture, having grown from popular seaside caravan park, Searles Leisure Resort in Hunstanton. It was here Paul Searle built his first golf course - an accessible, nine-hole pay-and-play course in 1999. "It was an easy course," Paul recalls. "The aim was to get people into golf, attracting elderly golfers and beginners."

But, on hearing that the farmer owner of the nearby Heacham Manor was thinking of retirement, he spotted an opportunity to expand and cater to the luxury market. At first snapping up the land to build the initial nine holes, Paul soon secured planning permission to turn the manor house into a fourteen bedroom boutique hotel, build the second nine holes and construct twenty-five of the planned 150 luxury log cabin holiday homes surrounding the site. "It's a quality development," he adds.

Keen to achieve a links-look course, in keeping with this luxury development, Paul turned to Collier Turf Care, having enjoyed a close working relationship with the company's managing director, Andrew Harding, for several years. You could be forgiven for thinking that it was Harding that was the driving force behind the specification of Barenbrug grass seed across the course and selection of individual mixtures and cultivars to achieve that links feel - but, listening to Paul talk shop with Andrew, and the Barenbrug area manager, Neil Pettican, it is clear his commitment to realising his vision includes him taking an unusually in-depth interest in grass seed selection to rival many a greenkeeping professional.

"I don't like making decisions on things I don't know about," says Paul of his knowledge of grass seed selection. "I've worked with both companies before, so I've become quite hands-on with choosing seed. I wanted a links-style course, but we're not on traditional links soil - we're on clay/silt soil. So, we've put artificial undulations in and used tall, willowy, wispy grass - the idea was that, if you stood on the tee and looked down the fairway, you would see that links-style grass. And I think we've achieved that."

Andrew Harding says that the original pay-and-play course provided an invaluable insight into which mixtures might best perform on the Heacham Manor site. "Mixtures were chosen as a result of how the species on the nine-hole course had performed, and the soil types on that course," he explains. "For example, we expected the new course to be a wet site - not excessively, but drainage is not great and no artificial drainage has been installed on fairways - so we chose mixtures accordingly."

The fairways and semi-rough have been sown with an eighty percent perennial ryegrass and twenty percent strong creeping red fescue mixture "to, respectively, give good wear and improve bottom growth", Andrew continues. "Other, longer rough areas are BAR 20, with long grass 'splashes' left to grow up to full height to seed head, which has worked really well. The greens are BAR 2, which is exactly what was needed for them - it just does the job."

Condition of the course 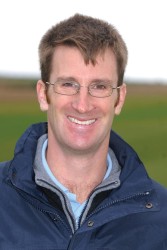 As you'd expect, Paul designed most of the holes himself and then commissioned local contractors to do the groundwork. The course was seeded around a year ago. "This was a short development - no three-year grow-in," Andrew continues. "Fast establishment was required. But the mixtures have established well - the fescues are performing particularly well. We've got that links look, but with a parkland/wilderness look as well."

Paul says that the team's next challenge is maintenance. The day-to-day maintenance of the course falls to Estates Manager, Ed Howes, together with deputy head greenkeeper James Reins. Both Paul and Ed are happy to admit that effective maintenance of the new course has been part of a steep learning curve - Ed is not a greenkeeper by trade and says he is still learning a lot.

"I've been keen on golf since I was a youngster," he says. "I joined Searles Resort five years ago and learned the ropes there, working my way up. Like Paul, I've gained a lot of technical knowledge from Andrew Harding, who's also advised on things like machinery and Verti-draining. This last year has been a big learning curve!"

The first maintenance hurdle for the team was one of the driest summers on record in 2009. "It was a difficult year without the rain," Paul says. "That's the driest it's been in twenty years - nine weeks without a drop! The fairways dried out and cracked a little, but we re-fertilised and overseeded them. The links-style rough was always going to be a challenge, but their good condition is testament to the seed choice. It was slow to establish, but is now performing well. The ongoing task is to keep it playable and keep the weeds at bay. We're now putting effort into getting to grips with the maintenance and getting it right."

Paul takes real pride in the quality of the course. "Our greens are reported to be some of the best in the county," he reveals. "The County Affiliates visited in early December 2009 and were very positive about the greens." He is now focused on raising membership and developing a clubhouse as part of his plans for Heacham Manor to become a conference centre and wedding venue. "Feedback so far has been very good."

He continues to work with Andrew, who visits once a month, and Barenbrug, to further develop the grassed golf, sports, amenity and general landscaped areas around the 200-acre site. "We've overseeded the existing pay-and-play course, as well as a bowling green, with Barenbrug," he continues. "We're also developing a golf practice area into a cricket square. It's been sown with BAR Extreme and my father's been cutting it - this is very much a family affair! We want to create a decent square and maybe have a mini-tournament."

As part of his ongoing education into the turf and grass seed sector, Paul is now looking forward to visiting the Sports Turf Research Institute (STRI) in Bingley with Andrew. In fact, the undoubted highlight of Paul's preparations for his Heacham Manor specification was a visit to St Andrews with Andrew and Barenbrug's research and development manager, Jayne Leyland.

"The trip to Scotland to see the new Castle Course was just unbelievable," he enthuses. "I was really impressed - the mounds were so abrupt. Meeting all the head greenkeepers over a fish and chips lunch was particularly useful and inspirational. I'm a traditionalist. St Andrews is 'The Home of Golf'. I'm very hands-on with Ed and work closely with him as a result of this kind of industry insight."

Despite his soil type and limited budget not being conducive to his aspirations, Paul has succeeded in bringing a little slice of St Andrews to the Norfolk coastline. How? Paul is in no doubt that careful grass seed selection has played its part. Your St Andrews-calibre courses aside, he says that all too often 'middle-ground' course owners invest in ambitious plans, only to scrimp on the essentials that can make all the difference.

"After you've invested £1million in your development, do you really want to scrimp on your playing surface?" Andrew asks. "Some people ask me to just sell them the cheapest seed, to which I ask them if they really want that, or do they want a quality surface with disease and drought resistance and all the benefits top seed brings? Paul knows that the best thing isn't always the cheapest thing, plus also appreciates the standards of service and support that working with us and Barenbrug brings."

Paul agrees. "It's not about how cheap something is. Yes, the price was right, but the relationship with Andrew was there. We're a family business and believe in the value of long-term relationships. For example, I've been with the same brewery for fifty years and the same bank for as long as I can remember. I call Andrew and he gets it done. Likewise, Barenbrug is a quality product. It's an investment - that's what it's all about."