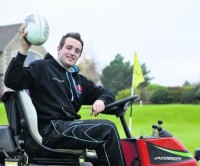 The 22-year-old, who works as a greenkeeper at Cumberwell Park Golf Club near Bradford on Avon, made his debut for Gloucester on Tuesday evening.

Sparks featured as a substitute as the Cherry & Whites beat Fiji, who included 13 players which played against England last weekend, 31-29 in a friendly at Kingsholm.

The National League One outfit's close links with Nigel Davies' Gloucester led to his place on the bench in last weekend's LV=Cup clash with Ospreys and Tuesday's subsequent appearance as a late replacement against the Fijians.

"It all started about two weeks ago when I was cutting the greens at the golf club in the morning and got a call inviting me to come to training with the first team at Gloucester that afternoon," said Sparks, who lives in Bathford.

"It was a complete shock. I've been at Cinderford since last Christmas and I knew all about their links with Gloucester and the fact that Nigel Davies is a coach that wants to give young players a chance.

"Playing full-time rugby is my dream.

"I started working as a greenkeeper because it meant that I could work in early in the morning and have time for training and the gym in the afternoons.

"It is hard sometimes having to work as well as going to training in the week sometimes, so I'd love it if I could get a contract at Gloucester, even in the academy."

Before joining Cinderford and breaking in to the fringes of the Gloucester set-up, Bath fan Sparks played National League One Rugby for Stourbridge, while training with the Worcester Warriors Academy.

He had a spell playing in Australia for Sydney-based side Eastern Suburbs and captained the South West of England U20s before he gained international recognition with the England Counties U20s.

The Kingsholm hopeful also went on to feature for England Counties at senior level.

Article sourced from :- This is wiltshire