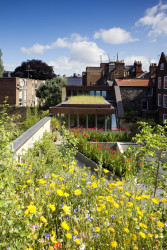 Sparrows are increasing in Islington following the planting of four green roofs on the same building in February last year.

Designed by Bere Architects as the company's London base, the building is topped by two partially wild flower meadows, one native Hazel coppice and a native Hawthorn thicket.

According to Linda Laxton of British Wild Flower Plants (BWFPs), whose specialist Norfolk nursery supplied plants for the two meadows it is the tufted and common vetch that are so important. "These plants became infested with aphids in early spring and just as the few local house sparrows nested there, they had a ready supply of food for their chicks," she explains. "Breeding was successful and the population increased."

"The sparrows were going crazy, climbing on top of the plants," reports Justin Bere, head of Bere Architects. "Since then, as the vetch got knocked back the meadow plants provided blossom for the bees, and the seed pods yet another supply of food for Goldfinches and the adult sparrows once the young had fledged."

Both Linda and Justin agree that the roofs offer an almost perfect environment for the birds. "They're undisturbed, safe from cats and the plants are attracting an ample food supply," Linda continues. "Since the 1970s with the rise of the motorcar many front gardens have been paved over to provide parking space, and the sparrow population in urban areas has dwindled."

For further information on British Wild Flower Plants contact the company on Tel: 01603 716615