0 Speed & Quality is the secret at Malone Golf Club

Speed & Quality is the secret at Malone Golf Club 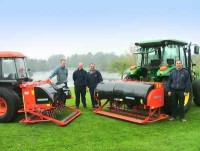 The speed and quality of deep aeration is one of the secrets to the superb level of course presentation at Malone Golf Club, the 'Augusta of Northern Ireland'.

Mike Norman and his team of 12 greenkeepers at the 27-hole golfing mecca on the outskirts of Belfast, use two Wiedenmann deep aerators to maintain the three 9-hole courses that can be configured to produce 18 holes of superb golf.

"We originally purchased a Terra Spike XP6 for our greens and approaches to improve drainage and promote a more healthy rootzone", Mike said. "Throughout September to April we aerate monthly and then use pencil tines early in July. The result is that the greens are draining easily after rain and looking in very good condition.

"Due to the success we had with the XP, we we're interested when we heard of the new XF, which is claimed to be up to three times faster than some other machines out there. We had a demo from our local dealer, Cyril Johnson, and were suitably impressed. The XF is impressively quick. We have been using it on our fairways and our semi-rough and because of the speed we can get around all 27 holes very quickly. Already, we have aerated the fairways half a dozen times since we purchased the machine in September last year."

Malone Golf Club has over 1,400 members and the present Ballydrain site is the Club's fourth home since it was founded in 1895. The main course is played using the Drumbridge course on the outward 9 holes and returning via Ballydrain on the way in. The recently refurbished clubhouse is an old stone built house dating back to around 1835.