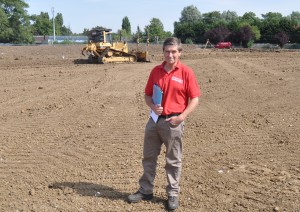 Speedcut contractors are carrying out complete construction of three high-standard football pitches at Northwick Park, Harrow, for Brent Council - in the shadow of Wembley Stadium.

The pitches, two senior and one youth, is a six-week project in which the Speedcut team have been working on 2.4 hectares of a former multi-use sports ground.

The job involves removing the topsoil, decompacting the subsoil, laser-grading the levels and laying 8,000 metres of primary drainage which will connect to an existing outfall chamber.

"When the topsoil is replaced," says contracts manager Kevin Smith, "it will be laser-graded to pre-determined levels prior to fertilising and seeding in mid-September.

"Once the grass is established the pitches will be sandbanded using the BLEC Sandmaster at 250mm centres, 150mm deep, to complement the primary drainage system."

Following this, 900 tonnes of selected sports sand will be applied in three applications as part of the initial 12-month maintenance programme.
This is not the first pitch construction job Speedcut Contractors has done for Brent Council, having previously built pitches at Silver Jubilee Park and Pellat Road.

Northwick Park is home to Kingsburians Rugby Football Club and Northwick Park Sports Pavilion. It is well used by local football teams and popular with youngsters and parents who have a purpose-built play equipment area next to the pavilion.

"The ground is typical London clay," says Kevin. "It can be difficult to deal with but we have not encountered any major problems with the ground so far.

"We always enjoy working with the Brent Council team and the Northwick Park site is particularly well-located being fairly open ground alongside paths which are popular with local walkers and cyclists, who have taken a great interest in our operations."

The Speedcut team will return when the grass is well established to carry out verti-draining on the three pitches.

"The summer weather this year has made a tremendous difference to our work schedules," says Kevin.