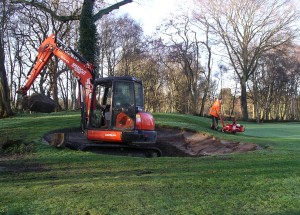 Speedcut contractors completed many golf projects across the southern counties last year - and have a full schedule ahead for 2014.

Barry Pace, Speedcut contracts manager, says: "It's been a challenging winter. We have had to work between weather fronts and have, like everyone, been affected by the wettest conditions on record. But progress is being made on many jobs - and we hope for some dry weather ahead."

Rochester and Cobham Park Golf Club, Kent, has been having bunkers reshaped by Speedcut, allowing greenkeeping staff to concentrate on turfing operations.

And at Dulwich and Sydenham Hill Golf Club, in South East London, Speedcut have been building two new winter tees and done rebuilding of steps.

At Piltdown Golf Club, East Sussex, Speedcut have rebuilt and reshaped seven greens with seven greens scheduled for work in 2014.

And in Surrey, bunker refurbishments are taking place at Silvermere Golf Club in Surrey.

Also in Surrey the Speedcut team have carried out further work at Foxhills Golf Club and Resort, where they completed green reconstruction on 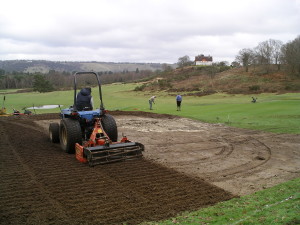 the 17th of the Bernard Hunt course - and drainage was carried out on the approach to the green.

They also rebuilt and reshaped the 8th and 9th greens on the Long Cross course as part of an ongoing programme of improvements to the prestigious club, where new paths have also been installed. Drainage was carried out on the Foxhills driving range.

At Orpington Golf Centre, Kent, Speedcut levelled and regraded three tees - with a fourth built from scratch as an addition to the excellent facilities at the centre, which is part of Cray Valley and Rushley Park owned by MyTime Active, who use Speedcut as their regular contractor.

Also in North London, Highgate Golf Club has had a green recontoured and returfed by Speedcut.

They have also built a new tee at the 15th at Langley Park, Bromley - designed by James Edwards Golf Design - and created new paths and reformed existing bunkers on the 14th.

n, while at Chislehurst Golf Club, Kent, they rebuilt the surrounds and approach to the 7th green, a Weller Golf Design project.

Dick Franklin, managing director of Speedcut, says: "Despite the many challenges thrown at us by the weather we are continuing to provide support to our clients and complete jobs when conditions allow.

"We hope for some dry weather ahead - as do all in the sportsturf industry."